For 2014, Mercedes introduced a new vehicle to their lineup of letters – the CLA. The new C-Class has up-market aspirations with its latest redesign, so the CLA 250 takes its place as Mercedes’ entry-level sedan. It’s a way of making the brand affordable to more consumers, specifically targeting younger people. Mercedes beat competitors from Ingolstadt and Munich to market by a few months. That time has allowed the CLA to capture a foothold. It’s time to see what the all-new CLA is all about.

The CLA doesn’t look much different from its siblings. While it’s tagline may be, “Starting at $29,900”, the baby Benz dresses to impress. Mercedes-Benz has developed a signature look across all its model lines, and that DNA is apparent in the CLA. There are cues, like its prominent grille and the way the roofline swoops down, that are reminiscent of its larger sibling, the CLS. Our tester, in Night Black, came equipped with the optional 18-inch wheels that added a bit more appeal under the wheel arches. The car garnered a number of second looks during our time with it. Most people don’t expect to see a younger face behind the three-pointed star. The CLA delivers a luxury brand appeal and status for a reasonable price.

We used the CLA as our escape vehicle from New York after the NYIAS. Despite its diminutive appearance, the trunk managed to swallow four suitcases through its narrow opening. Inside, the front seats are supportive and comfortable for longer rides. Integrated headrests and firm side bolsters add an air of sportiness to go with the thick sport steering wheel. The back seats are narrow and headroom is limited to keep the “four-door coupe” appearance. That means larger rear passengers are going to be a bit cramped. Visibility forward is fine, but rear passengers won’t see much with the narrow windows and thick C-pillar.

On the inside, it felt like time was devoted to some things more than others. The overall interior is well appointed and Mercedes-like. The round air vents set in the curved trim piece were unique and set off against the black interior well. The silver accents, although plastic, have a true metallic look to them with a unique design. The ambient lighting adds extra appeal at night. Mercedes thoughtfully carried the lighting into the back seat, something that most manufacturers overlook. MB-Tex is one of the best vinyl interiors out there, and it truly is soft to the touch. Our biggest problem came with the COMAND navigation system. The system, with only two buttons and a knob, is somewhat difficult to use. We sat for at least 10 minutes trying to enter a location into the navigation system. We wouldn’t call it intuitive, but it got easier to use as the week progressed. The larger issue, one pointed out by everyone who saw the car, was the screen. Its presence seemed like an afterthought, as if the designers were so busy contouring the dashboard trim that they forgot to integrate a screen. The solution? Just stick it on there.

A ride in the CLA 250 reminds you that it’s a car meant for the younger generation. It’s a hard ride, the kind that a typical C or E-Class buyer would not appreciate. The sport-tuned suspension is firm for a reason, the CLA handles with great precision. The steering is quick and precise, giving the car a nimble, darty nature. This character is aided by a turbocharged 2.0-liter four cylinder engine with an output of 208 horsepower and 258 lb-ft of torque. Mercedes’ 7-speed dual-clutch transmission offers the fun feeling of a traditional manual without the clutch. Paddles on the wheel can control shifts, but the mapping was superb when the transmission was left to its own devices. Unlike the more powerful CLA 45 AMG, the 250 makes due with front-wheel drive. The fuel economy in the CLA was astounding, it returned an average of 30 mpg during our week of city and highway driving. The CLA is adaptable – it’s ready for a spirited drive through the countryside or the typical commute to work. 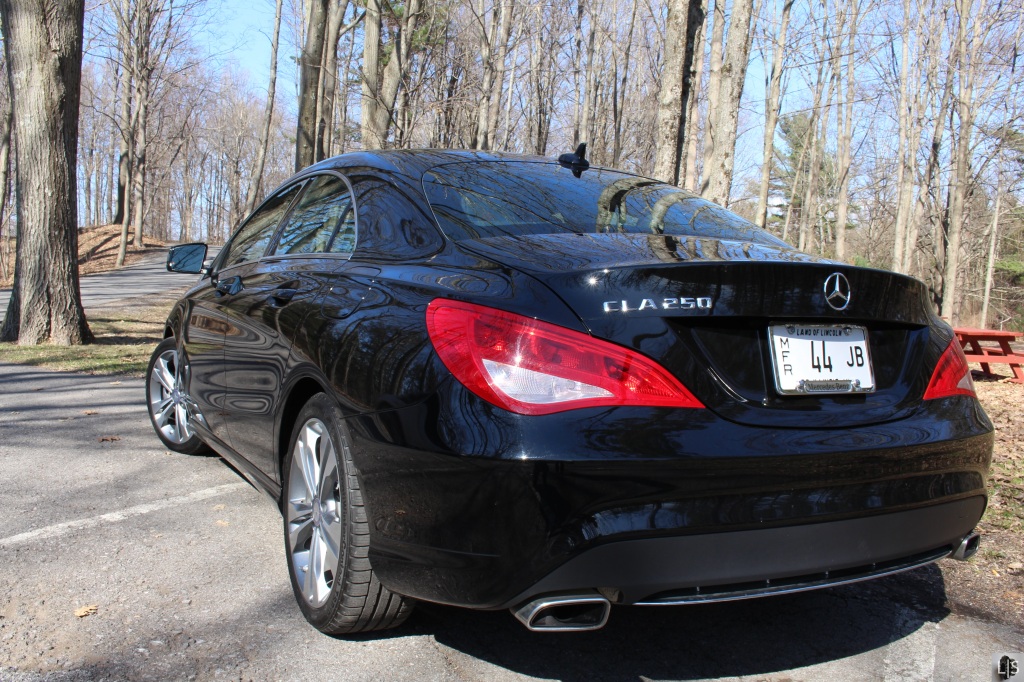 The CLA 250 has opened up the market for a car with the status of a Mercedes-Benz without the large price tag. It slips into the parking lots and valet queues undercover. From the outside, the CLA has big-money curb appeal. Only once your inside do the cost-savings become apparent. Mercedes has built and priced a car that aims right at the young professional. The CLA is youthful in nature and price, but shows a more mature buying decision. The CLA is a probable hit for the younger audience it’s aimed at.