Our first impression of the Audi A3 was that of a younger, sprightlier A4. Its smart styling and compact packaging are reminiscent of the A4’s formative years – a time when it wasn’t encumbered by the bloatware built into the modern luxury sedan. For 2015, Audi has given the A3 the S-car treatment with a new powerplant and matching drivetrain and suspension upgrades.  How did a week with this hotted-up hot-hatch alternative go? 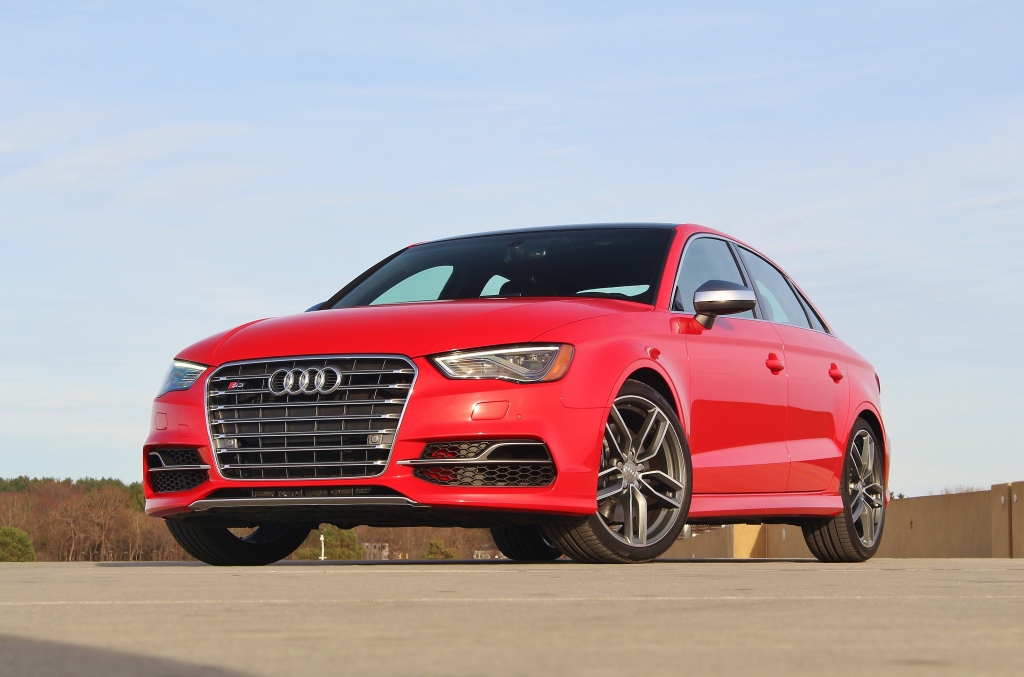 Audi swaps one 2.0L turbo for another. Instead of the pedestrian (in comparison) 220hp and 258lb-ft torque in our A3 tester, the S3 gets a playful 292hp and 280lb-ft torque from the TFSI unit. A completely redesigned top end, revised engine map, and larger turbocharger account for the engineering behind the power bump. Sadly, the S3’s only available gearbox is Audi’s 6-speed S-tronic DSG unit. It’s hard to complain about the transmission. It does its job damn near perfectly, but the driver-centric nature of the S3 is perfectly suited for an optional clutch pedal.

Outside, the S3 wears typical S-car trappings; brushed aluminum window trim and side mirrors, quad exhaust pipes, and a unique front fascia with silver grille. LED headlights are standard on the Prestige model and larger 19” wheels arrive as part of the 19” Performance package. Despite sharing its underpinnings with the Golf and GTI, the S3 stands both more aggressive and more grown-up looking than its hatchback relatives. There’s nothing excessive or overtly bland about the S3. It wears a lean and purposeful design that comes across with just enough “I’m sporty” visuals to keep it distinct.

Our opinion of the S3’s interior remains the same as the A3 – utilitarian, bordering on minimalist. The S5-sourced flat-bottom steering wheel, grey gauges with subtle boost indicator, and sportier seats with adjustable thigh cushions and S3 logo cue into this spicy sedan’s true intentions. The biggest disappointment of the week came from those new seats.  There just isn’t enough lateral support to enjoy the Audi’s tenacious levels of grip.  The $1,500 S Sport seats package should solve that issue, but you shouldn’t have to pay for sportier seats in a sportscar. The rest of the features work as intended. We still prefer the pop-up screen to the “stuck-on” style found in competitors and the automatic climate control is a welcome feature. 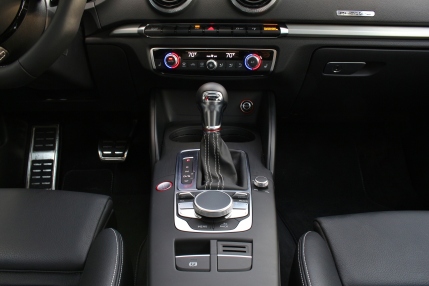 Driven normally, the S3 is flat and almost clinical in its execution. Pull the transmission into sport, however, and it takes on a more affable demeanor. The engine surges above 4000rpm now that the transmission isn’t shifting for economy. The S3 makes all the sounds of your favorite driving simulator. Between the turbo spinning, exhaust thrumming, and Audi’s in-dash soundaktor, it’s just the right soundtrack to accompany the ride. And a good ride it is. The optional Audi magnetic ride suspension, part of the aforementioned 19” Performance package, can adjust the ride from the firm side of comfortable to roll-free in an instant.  Paired with the unexpectedly quick steering ratio, the Audi drives into corners without the same level of understeer as the larger S5. The S3’s bigger brakes offer confident bite to round out the driving experience. It’s the most well-balanced Audi we’ve ever piloted.

There’s a pretty big elephant in the room every time the S3 gets discussed – price. Our S3’s as-tested price, just shy of $50,000 for this top-trim Prestige model, makes it more expensive than an S4. The S4 might be larger and heavier, but it’s every bit as fast, has even better low-range torque, and can be had with a manual transmission. The S3 also lacks several amenities that you’d expect out of a $50k car. Where are the heated seats and driver seat memory functions? Why do I have to pay more for better seats? Can the S3 justify its $10,000 premium over the Volkswagen Golf R, a car that shares the same platform and power unit? You’ve got to be die-hard sedan fan, or a quattro-head, to justify your decision. We’re thankful the S3 sedan exists, but it’s a tough argument.

Price notwithstanding, the S3 blends power, agility, and control into a mouth-watering four-door package. Pegging the throttle (and short-shifting to keep the 2.0T from running out of wind at the top of its rev-range) was an oft-repeated exercise. The S3 even comes with launch control. But after confirming it worked as directed, we tried to keep the Misano Red Audi from attracting too much undue attention. At least, that’s the official story. We racked up just over 500 miles, avoiding highways just for the fun of it, and still averaged 25.3mpg. A more, uh, mature driving style would have yielded better results. But can you blame us? The sheer competency of the chassis and grip from the quattro system can easily cope with the S3’s power. That means the hottest variant, the RS3, should be even wilder.