Porsche Cars North America opened the doors to its new corporate headquarters in May of 2015. But the complex at One Porsche Drive in Atlanta, GA is more than just a stuffy office building. If you’re a Porsche fan in the slightest, you’ll know it as the newest of three locations where you can attend high performance track and off-road driving programs. That would be quite the experience in itself, if you don’t show up on a Monday like we did. Monday is track maintenance day, so the 27-acre complex was unusually quiet as we arrived in the Cayenne GTS. We were actually thankful not to have had any track time, since what we found inside the building was much more of an experience.

The massive facility houses the corporate offices of several Porsche divisions. It also offers 13,000 square feet of conference and event space and a high-end eatery, Restaurant 356. There’s even a museum to display a select few Porsche models. Don’t forget the Porsche Accessories shop. But the Porsche Experience Center is more than the sum of its parts. It isn’t just a place for employees, partners, and guests. The Experience Center is a North American hub for Porsche customers new and old. New customers can browse the array of Porsche Exclusive paint colors and options. And starting just recently, customers can take delivery of their new Porsche at the Experience Center. As a whole, it welcomes brand enthusiasm from the minute you park your car. After all, the company 918 Spyder charges quietly in a prominent space next to the elevators.

The PEC lobby is equally unique. Rather than chairs and office plants, the lobby is dotted with cars. Featured heavily is at least one of every current production model designed and ordered to highlight the Porsche Exclusive options catalog. Heritage is not overlooked, however. Amid the shiny new paint sit a select few battle-scarred pieces of Porsche racing history, like the #17 Rothman’s Porsche 962 that raced LeMans from 1987-1989. There’s even an entire wall of die cast cars tracing the Porsche timeline from the 356 in 1948 to the 991 911 GT3RS today. It might take you a half-hour to wander the lobby and appreciate each display piece. But you’ll notice you aren’t alone. We observed several employees stop and spend some time discussing aspects of the new Aerokit Turbo option featured on a Lava Orange 911 Turbo S Cabriolet. What did you do at work today? 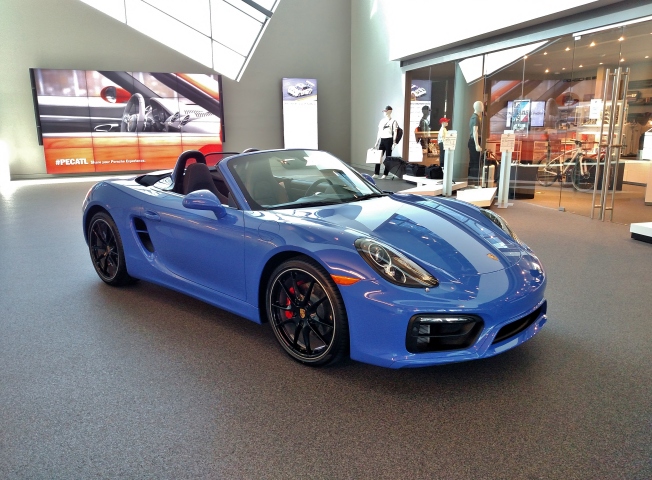 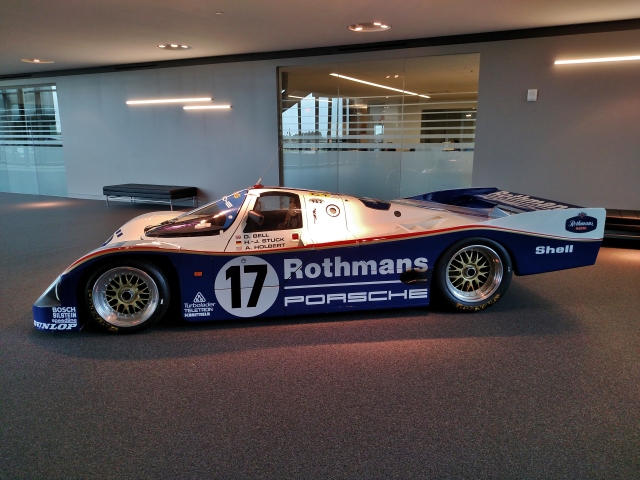 When you’re finally done with the lobby, the PEC museum awaits. Currently displaying some of the world’s rarest 911s, you’ll be lucky to spend anything less than an hour admiring each piece in the collection: an original 1967 911R, the iconic 1973 Carrera 2.7RS, a 964RS and 993RS, the Europe-only 996 GT3RS, and the supreme 997 GT3RS 4.0. If you’re done with those, why not turn around and ponder the pristine Porsche 959, a car that pioneered the modern supercar formula. Since we visited, a additional 911 has been added, the new 991 GT3RS. This would be where the general public’s tour ended. But since we had come all this way, we were afforded behind-the-scenes access to Porsche’s biggest, and most astonishing, Experience Center feature. 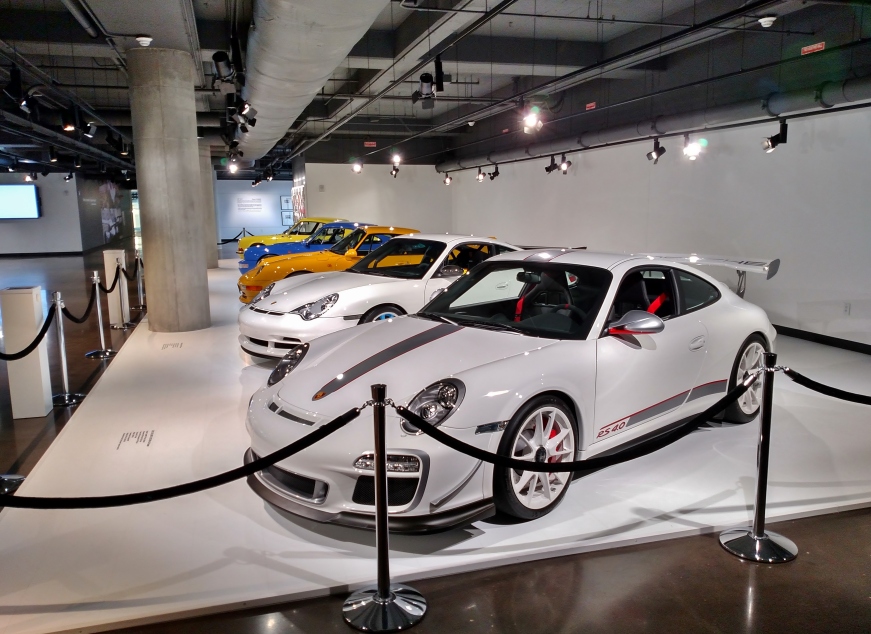 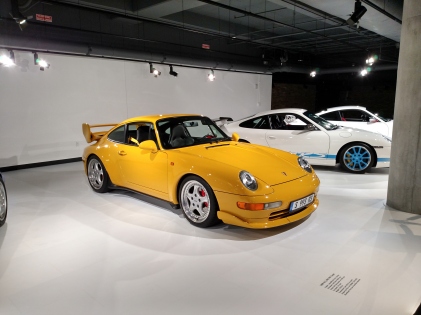 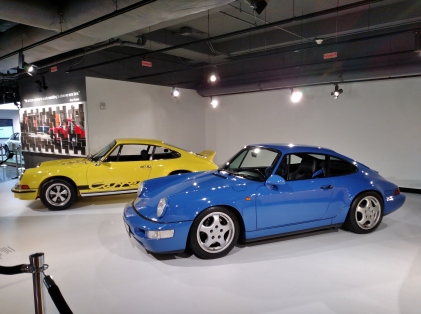 Let’s say you’re the lucky owner of a Carrera 2.7RS just like one in the museum. Firstly, congratulations. Second, where would you get service? Is your local Porsche dealership certified to change the oil on your half-million dollar baby? Probably not. And what if, Ferdinand forbid, you need the engine to be completely rebuilt? Enter the Porsche Heritage Center. If your Porsche model is more than 10 years out of production, the Heritage Center is certified to service, repair, rebuild, and restore it. The shop is home to some of the most skilled Porsche technicians, including the longest tenured Porsche mechanic in the world. The range of work they take on is astounding. It could be as simple as a brake job on a 996 GT3 or as complex as the piece-by-piece restoration and rebuilding of a 2.7RS motor. Both were underway when we stopped by. 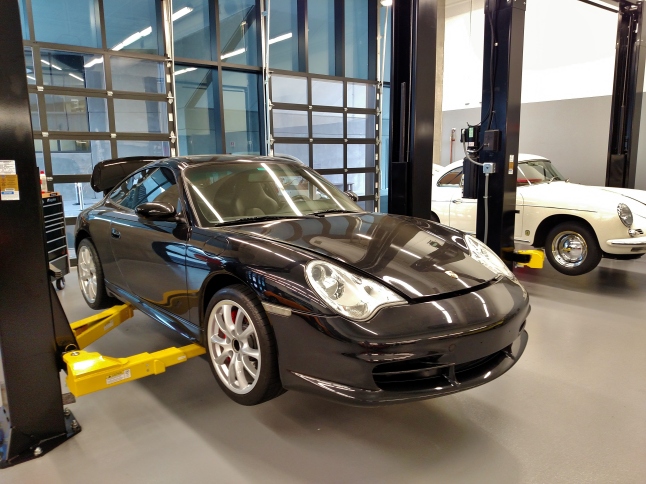 It isn’t just the type of work that happens at the Heritage Center, either. It’s the appreciation, the knowledge, and the attention to detail, that stunned us. They don’t make parts for that 2687cc Carrera motor any more. So every component is disassembled, washed, polished, and coated or painted back to original (or better) condition. Is something broken? They have the network to find OEM or better parts. Perhaps your 996 GT3 is feeling a bit…mundane. Maybe you wish the engineers had dialed in a little less understeer. Did you know that the 996 GT3 front control arms were designed and built to have two settings? The mechanics here do. From the factory, the car shipped with the control arms installed in the “safe” setting. But if you take the control arms off and invert them, the altered suspension geometry is optimized for maximum track handling. Should you like, they’ll gladly take the time to make your GT3 better than how it came from the factory. That’s very clearly the mindset here. Everything done at the Heritage Center is factory equivalent or better. 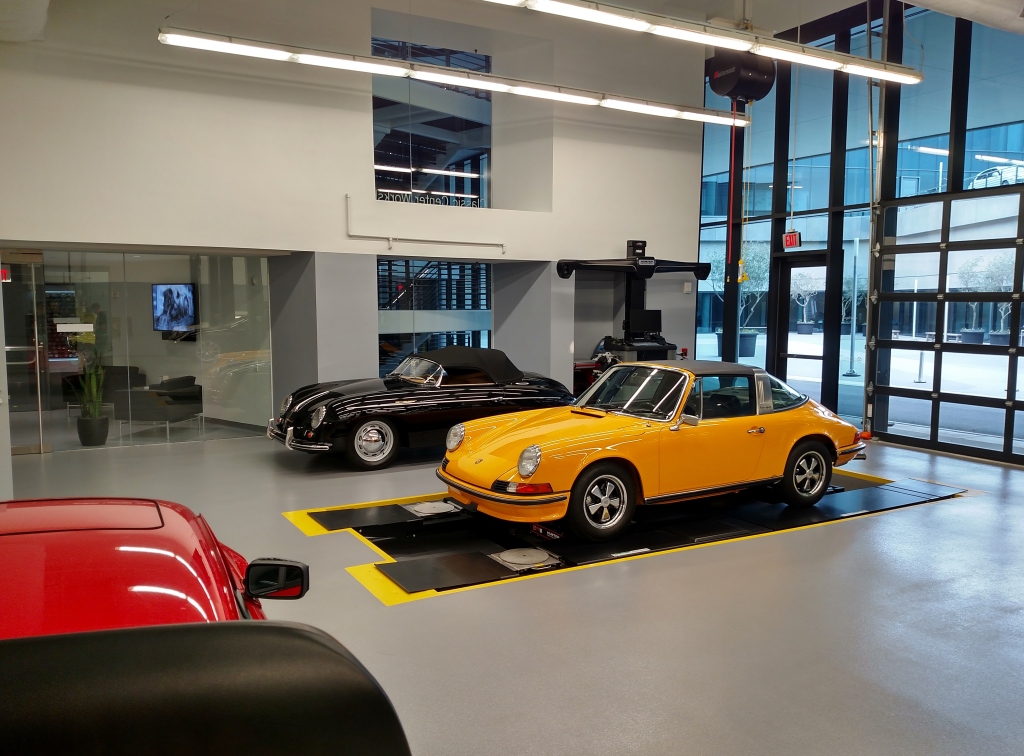 The general public might never get a detailed walk-around a 996 GT3’s underside with a Porsche Master Mechanic. They might never stop to consider the amount of engineering that went into its factory control arms or what the optimal rear differential locking ratios would be. They probably won’t hear stories of an early 2000s Boxster with a 996 GT3 drivetrain swap, either. But these are all things that the employees at the Porsche Heritage Center know about first hand. And these are all things that Porsche enthusiasts would tell stories about on any given Sunday at their local Cars & Coffee. Porsche hasn’t just built a corporate headquarters or a performance driving center. It’s built a place that fosters new enthusiasm while quietly supporting the brand’s most iconic and valued assets. No, not the museum pieces or company-owned 918 Spyder. The Porsche Experience Center is built for customers and their cars, both new and old. So if you’re in Atlanta and you want the real Porsche experience, make sure you don’t waste all your time on the track.