Sport and luxury. Its a lofty goal to combine the best of both worlds, and the penalty for missing the mark can be steep. The GS350 is Lexus’ mid-size attempt, and its a solid competitor. Can it be both sporty or luxurious? It’s a car that is very capable, but does it know what it wants it wants to be? We spent a week trying to find out.

You can usually tell a lot about a car from sitting in the driver’s seat. With the Lexus, though, its difficult to discern. It’s impossible to be uncomfortable swaddled in 18-way power adjustable heated/cooled perforated leather seats, which makes it very luxurious. At the same time, some of that adjustability controls the side bolstering. With the seats providing a friendly hug, the three-spoke steering wheel and paddle shifters make the same space feel sporty. We’ll need to go deeper.

Keeping the depressingly hollow-feeling key in your pocket, stepping on the brake, and depressing the Start button stirs the 3.5 liter V6 to life. The car defaults to “Normal” mode, which is comfortable and composed around town and on the highway. Turning on all of the driver aids transforms the GS into the ultimate commuter car. This is when the luxury side of the Lexus GS350 comes into its own. The heated seat and steering wheel keep you comfortable while the harshness of the outside world is muted. A typically cold and bumpy February commute became a stress-free time to relax. The cabin is remarkably quiet and vibration-free. In fact, it feels as if you’re the only person on the road.  This isn’t true, of course, and Lexus’ blind-spot monitors and active cruise control are always watching over you. Dial up your favorite radio station or playlist, sit back, and be ushered forth towards your destination. 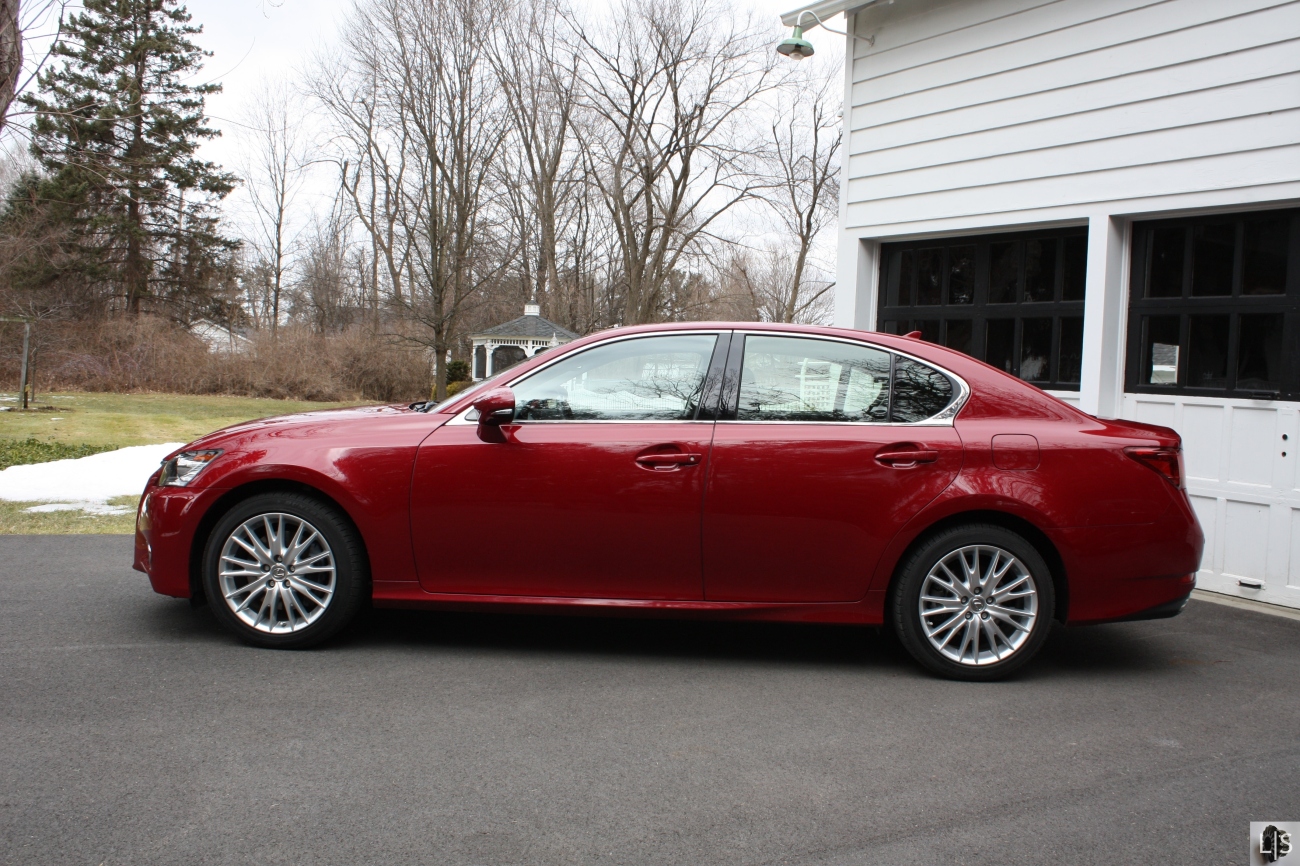 Sometimes you don’t want to relax and sometimes there isn’t a destination. With 306hp and 277ft-lbs torque routed to all four wheels through a 6-speed automatic transmission, the Lexus is aptly prepared for these times as well. Twist the drive select knob clockwise to activate “Sport” mode, which increases throttle response and steering feel. Twist it clockwise again to activate “Sport +”. This stiffens the car’s suspension up and eliminates much of the “luxury” from the ride. Suddenly the engine seems more audible, though the changes have nothing to do with the exhaust system. The GS350 leaves the line with a tinny buzz, but clears its throat as it revs to the 6,400 RPM redline. The end result is 0-60 in 5.7 seconds, which is very sporty for a nearly 4,000lb sedan. In “Sport+” the Lexus drives much smaller than it actually is, though you’re reminded of the curb weight under braking. The all-wheel-drive system works almost seamlessly, with changes to power distribution discernible only at the very limit of grips.

The GS350 we tested had a very long list of options. Starting at a base price of $49,450, these options added $12,800 to the sticker price. The Luxury Package, accounting for nearly half of the that, contains most of the amenities that set the Lexus apart, including the 18″ wheels, drive select settings, and the multi-talented front seats. The $1,735 Navigation Package adds the 12.3″ screen with Lexus Enform apps. Getting the Lexus to almost drive itself requires the $2,000 pre-collision system with dynamic radar cruise control as well as the $500 lane keep assist system. Blind spot monitoring and park assist add another $500 each. The final big-ticket item is the $900 heads-up display. Despite all this, this well-loaded Lexus remains competitively priced against its major German competition.

So, does the Lexus GS350 AWD know what it want’s to be? The short answer is no. It doesn’t. Luckily, the car isn’t the one making the decisions, the driver is. With the push of a few buttons, you have a luxury cruiser. A few twists of the drive select knob and the car changes, coming alive in your hands. It can be satisfying either way, and brought a smile to my face on multiple occasions in both settings. The ultimate trouble is that it never masters beings sporty and luxurious at the same time. This spoils the experience a bit, as the driver is forced to make a choice. Sport or Luxury.
-Christopher Little
Related
Just Right: 2014 Lexus IS350 AWD
The Founding F: 2013 Lexus IS-F
A Vicar in a Sportcoat: 2014 Lexus LS460 F Sport
The 6th Man: 2013 Lexus CT200h F Sport