Three months ago, we witnessed a Kia Cadenza for the first time on the show floor at the New York International Auto Show. Having been debuted elsewhere, it attracted little media attention. But it was our first time seeing it in person. We liked it then, and after having one for a week, we like it even more now.

What to think of this Cadenza? It’s Kia’s first step towards their self-proclaimed goal of transforming themselves into a luxury brand. There will certainly be more to come, but this is the car that will get the credit for starting it all. The Cadenza shares the much of the same underpinnings as the Optima. That’s not a bad thing, but to make it more luxurious, some length needed to be added. The Cadenza has a growth spurt to the tune of 5.2 more inches. What does that achieve? More leg room all-round, as well as cargo room in the trunk. The LED and active Xenon headlamps, bodywork, and the gorgeous taillights, The Cadenza is an understated luxury sedan. It’s relatively new presence on the open road  means we received many confused (yet admiring) looks all week. Our tester featured the optional 19″ wheels to set off the profile just perfectly.

Inside the Cadenza shines through in spades. The list of features for the price is staggering. Ventilated driver seat, lane keep assist, blind spot monitor, rear camera, panoramic sun roof, and navigation are just a few of the options that came packaged in our top-of-the-line Cadenza tester. To be honest, it reads remarkably similar to the options list on the much more expensive Lexus GS350 that we previously tested. I’m not quite sure that I would pick the no cost option white interior package for fear of seat wear, but it looked great.

What about the drive, then? Since it is based off the Optima chassis, the front wheels still do everything. However, the extra inches allowed Kia to fit a 3.3L V6 under the hood. The new engine makes 293 horsepower and 255 pound feet of torque. It does everything right for a luxury segment lump. It delivered the torque evenly throughout the range and even sounded great as the revs climbed. All of the aforementioned power is mated to what Kia calls a 6-Speed Electronically Controlled Sportmatic. That’s marketing jargon for a 6-speed automatic. There in lies the problem. Where most luxury sedans are spinning with seven and eight speed units, this makes due with only six. Thus the fuel economy wasn’t ideal, netting 21.3mpg for the week. One benefit over other luxury competitors is the the use of regular gasoline.

Our tester came optioned with the optional P245/40R19 all season tires which made the ride a little more alerting than one would prefer in a car of this class. The removal of the Technology Package, which reverts the Cadenza to the 18″ examples, would probably offer a ride more fitting for a car of this class. The handling was as-expected from a front wheel drive car weighing 3,800 pounds. It rolled a little in the corners and, when pressed hard, would plow straight ahead with an alarming level of understeer. However, the numbers of Cadenza owners that will experience such speeds in corners is slim to none, so it’s not really even worth talking about.

The bottom line here is more of a question. Who does Kia want to take the fight to? Are they trying to challenge to BMW and Mercedes? Lexus, Acura or Infiniti? Or are they creating their own niche? I think the answer is much simpler than that. Kia is beginning to redefine itself in the marketplace. They’ve set the goal of being a luxury brand by 2017, and this is just the first step. Sure the $41,900 for our tester may be a hard number for some to swallow, but as sales have shown, there are people that are seriously considering Kia to not just be a player, but a star. As a new luxury offering, it has that potential.
-Scott Villeneuve 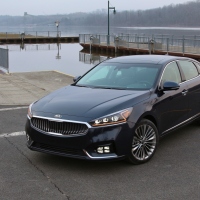