Something amazing is happening in America. Both the take rates for manual transmissions and diesel powertrains are on the rise. Similarly, the sales of manual-equipped diesel-powered vehicles is also on the rise. We at Limited Slip Blog refer to that combo as “the Euro option” since this powertrain combination is the gold standard on the other side of the Atlantic. What better way to sample such a combination than in Volkswagen’s new Passat? After all, 78% of all diesels sold in the US in 2013 have been VWs. 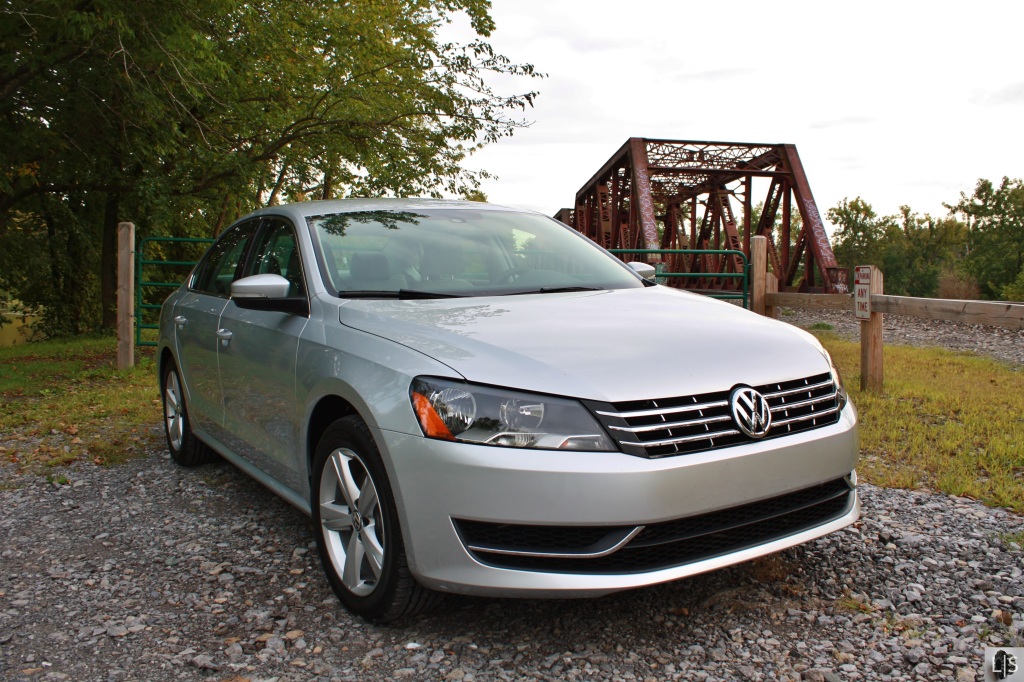 Volkswagen received a lot of flack for the redesign of the Jetta and Passat when they opted for mass-market appeal. We don’t share the same opinion. The Jetta, especially in GLI trim, is a sharp looking car. Admittedly, the larger Passat in Reflex Silver Metallic is a bit pedestrian compared to some of its competitors, like the Ford Fusion. But the car is visually purposeful and about as unoffensive as any redesign in recent memory. It fits the bill as the stereotypical German sedan.

Inside, the same purposeful design is continued. The cabin feels spacious and open with a large greenhouse and excellent visability. The back seats, a crucial measuring stick in the family sedan market, are large enough to fit a 6’2″ passenger behind the 6’2″ driver comfortably. Visibility and ergonomics are excellent with one exception. The pedals are offset heavily to the right making for and awkward seating position for the driver. Our tester in SE trim had a very short options list. The absence of luxuries like the optional sunroof or navigation system might be missed, but they keep the car’s as-tested price below $28,000. And for that you get standard equipment like 17″ alloy wheels, heated front seats, and a touchscreen sound system with satellite radio. It should be said that a DSG gearbox is also available, but that would ruin some of the fun. 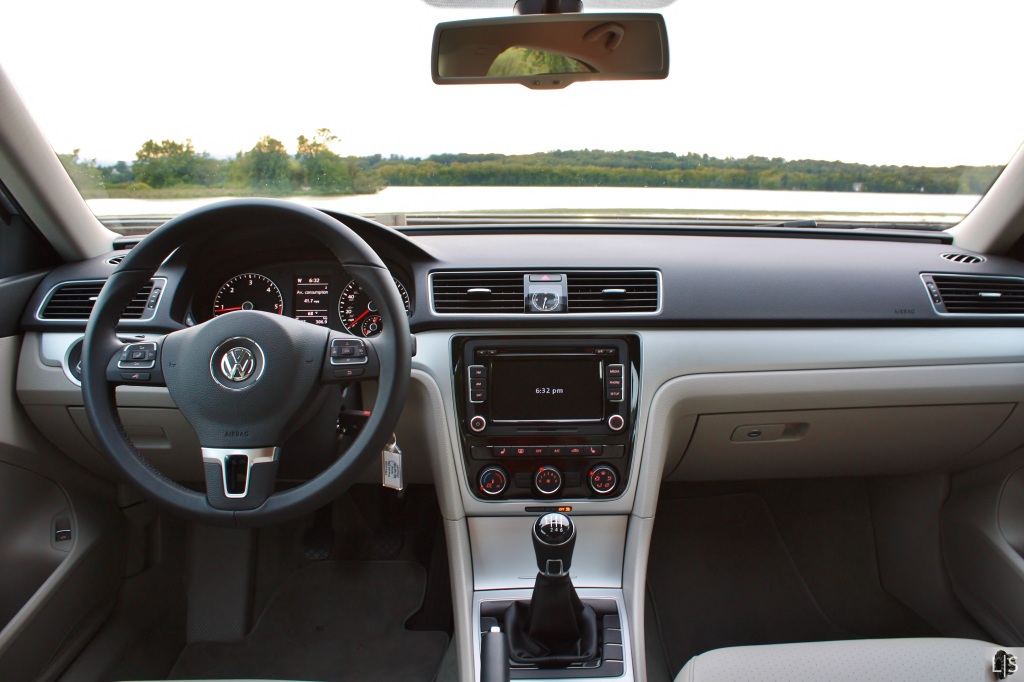 The car is stereotypically German inside and out, so its fitting that the engine is stereotypically diesel in all but one way. The Passat pulls off the line with 236 lb ft of torque twisting from the 2.0L turbocharged four cylinder at only 1,750rpm. The engine’s power tops out at 140hp at 4,000rpm and runs out of steam not long after. Make the rather long throw into second and power is back. The gears are well defined and throws are intuitive. The linear power application and great shifter allow the Passat to surge forward with buttery smoothness. It doesn’t fell like much is happening but the car is never caught out for being too slow. If it wasn’t for all the low-end torque it would be difficult to tell you’re in a diesel. With the exception of start-up and idle, the Passat TDI doesn’t sound stereotypically diesel.

The rest of the driving characteristics are all positive. Turning the leather-wrapped steering wheel requires little effort but results in precise and responsive movement. The suspension isn’t too firm for a family sedan but the car doesn’t trip over itself through corners or under hard braking. Its a remarkably pleasant car to drive. The Passat TDI doesn’t give you any reason to dislike it, and because of that you find that you can’t. It doesn’t win any performance awards and it isn’t chock full of the latest gadgets. It is, quite simply, das auto. Perhaps that’s why it is so endearing. 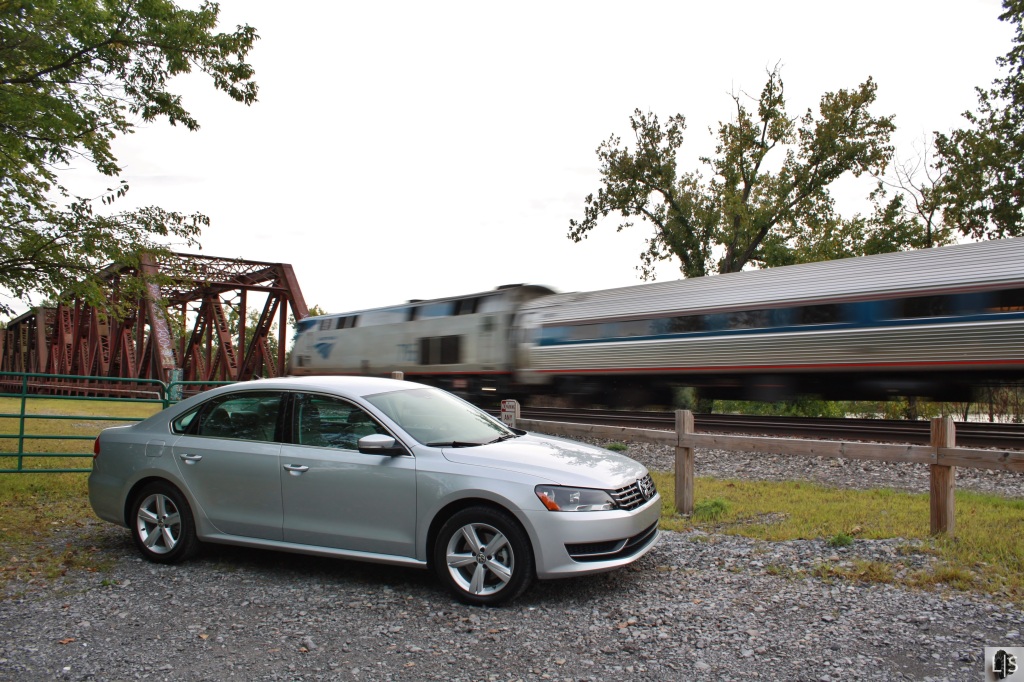 All this and we haven’t gotten to the best part. The Passat TDI SE seems like great value for money even before mentioning its EPA estimated 35mpg. We split our 300 miles between morning commutes and afternoon back roads and averaged an impressive 41.7mpg. When topped up, the Passat TDI’s trip computer estimated an operating range of 795 miles! That’s simply amazing and it explains exactly why this type of powertrain is so popular in Europe. Unfortunately, TDI acceptance is still an uphill battle in the US. When I recently recommended a diesel to someone looking for a new car they told me they, “didn’t want to hurt the environment.” Ouch. Luckily, clean diesel technology has come much further than its dirty perception and that is beginning to change some minds. Trends show that US buyers are beginning to warm up to diesel and VW has doubled-down on their TDI offerings. Shortly after our test, VW announced a more powerful and efficient 2.0L TDI engine would replace the current motor in in the Beetle, Golf, Jetta, and Passat by 2015. If that continues to help get Americans to buy diesel cars with manual transmissions, then that sparkless hum is music to our ears.

All Grown Up, Still a Bit Short: 2012 Volkswagen Beetle