If you are in the market for a daily driver but seeking a vehicle that delivers on power and performance, this is the car for you. Cadillac is making an evident transition towards sport oriented vehicles, while retaining much of the well-known luxury label that is associated with the brand. But this isn’t your grandparent’s Cadillac.  The ATS is proving to be a formidable adversary for European sport sedans like the BMW 328i, Audi A4, and Mercedes-Benz C300. 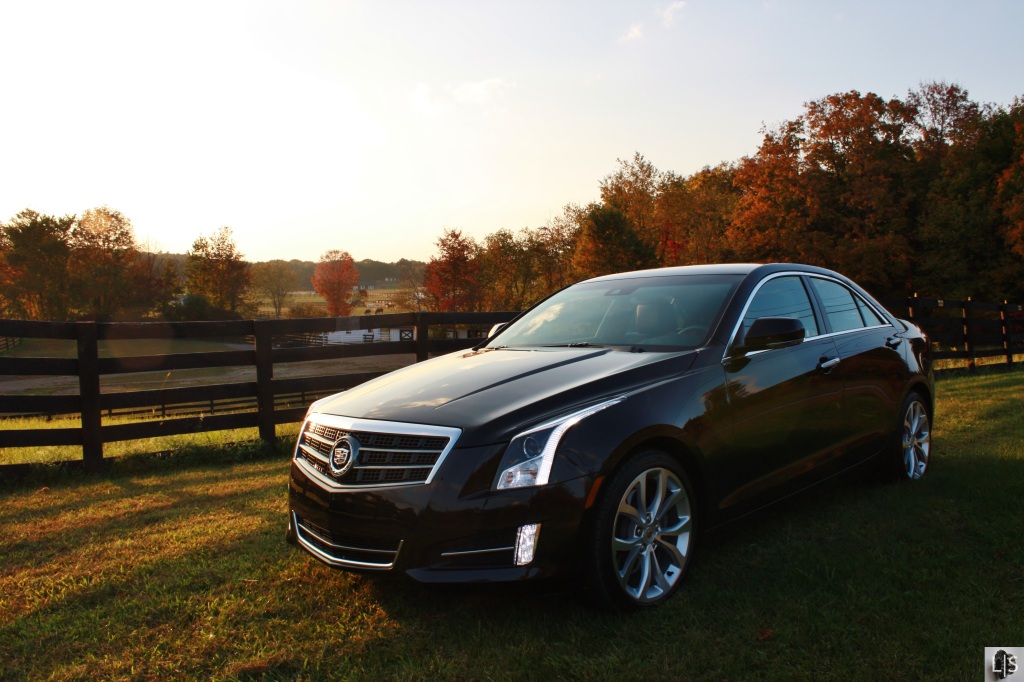 The front and rear of the ATS has smooth but defined lines, creating a very bold presence. It has a distinctive look on the road with its LED daytime running lights extending aggressively from the lower grilles up half the hood. However, the ATS loses some of its definition when viewed from the side. Complimenting the Cadillac’s art and science design was the ATS’s optional Black Diamond Tricoat paint color.  It’s an extremely metallic black that, as a $995 paint option, had some of our staff on the fence. Our tester’s “diamonds” were combined with a girl’s other best friend, wine. The unique interior color, called Morello Red, was accented by carbon fiber trim. It was different—we could not think of another vehicle with a similar interior color. The ATS has a superior interior quality with a modern, elegant design, from the frameless rearview mirror to the real polished metal instead of imposter plastic finishes. The hidden storage located behind the display was another unexpected feature.

The ATS comes equipped with CUE, the Cadillac User Experience. There was disagreement amongst the staff as to the degree of user friendliness. The 8 inch LCD touch display is relatively straightforward to use. Cadillac imbedded proximity sensors below the screen to trigger additional screen options to appear as your hand approaches the screen, which was a subtle but effective surprise. However, CUE occasionally lacks in responsiveness—it may take two taps to get to the correct screen. The navigation system, although accurate could use some added attention in the years to come. The map scale is easily changed by pinching or dragging your fingers, just like a smartphone. When zoomed in, you lose the ability to view upcoming street names.  The glitz and glam of the CUE interface comes at the cost of functionality.

Cadillac is right up to par with other luxury brands in naming their trim lines. Our tester was the ATS Performance Collection, a trim level that includes the Driver Awareness package. This adds automatic high-beam control, automatic wipers, rear-seat side airbags, forward collision, and rear cross-traffic and lane departure warning systems. Initially unfamiliar with the lane departure warning system, we drove the ATS on a country road and crossed the double yellow line. In turn, the system vibrated the left side of the driver’s seat as a form of alert, which is by itself an odd sensation to say the least. One of the most unexpected disappointments had to be the rearview camera—the resolution and coloring was lacking. It did have guide lines in order to aid in turning while in reverse, however, which some rearview cameras lack.

In the competitive sport sedan segment, you must rely on more than appearance and features to be worthy of a top spot.  The ATS’s drive does not disappoint.  Cadillac’s new Alpha platform is a wonderful chassis and when combined with the new 2.0L engine makes it an excellent package.  Corner entry was very precise, and turn-in was spot on with exceptional feel.  The 2.0T would pull strong on corner exit with its 260 lb-ft of torque, and the 272 horsepower keeps it going all the way towards the next corner.  There was some sense, however, that the engine was being held back by its partner, a 6 speed automatic transmission. The Performance Collection includes larger Brembo brakes as well as sport turned suspension that made the car a little stiffer than some other cars in the segment, but not uncomfortable.  The suspension has 3 settings, Sport, Touring, and Snow.  We left the ATS in Sport nearly the entire time, and were pleased to find that the car remembered the suspension settings after it was turned off.

The ATS has given loyal German vehicle owners a viable reason to switch brands and consider an American manufacturer for their next car. This, of course, is because Cadillac set out to beat what it considers its arch nemesis, the BMW 3 Series.  It proves to be a relatively comfortable yet fun daily driver, and if you are looking to drive something different from the norm, give the ATS a chance to shine.  We took Cadillac’s smallest sport sedan and put it in a head-to-head comparison with it’s primary target, the BMW 3 Series.  Read the results here: Gray Space: Cadillac ATS 2.0T vs. BMW 328i.