The 2014 North American International Auto Show media days have ended. As Detroit recovers from the influx of over 5,000 journalists and Joe Biden, we sat down and talked through our opinions of the show. The resulting list, conceived at Olive Garden over endless salad and bread sticks, has been conveniently sorted into the 5 best and 5 worst of the show.

Acura’s display was centered around the unveiling of the TLX concept. Debuting in what appeared to be production-ready form, the TLX will probably replace the TSX in 2015. They even pulled the covers off of a TLX GT race car, which hopefully indicates that the new TLX will have more sporting characteristics. But we were distracted from all this good news by a nondescript round table spewing smoke like a miniature Eyjafjallajökull. What was it? Something about man-machine synergy. What was displayed on the console you ask? A naked man. While most manufacturers stick with iPads or giant touch screens, Acura literally went with smoke and mirror. That might not be the best way to share information.

Smart, in the US, has always felt like a car without a market. Nobody envies that person in the Smart ForTwo on the highway. But Smart was on full display at the NAIAS this year, arriving with more cars than Mitsubishi. (This might not be a fair comparison, Mitsubishi didn’t attend the 2014 NAIAS.) Smarts with electric motors, Smarts with retractable roofs, and Smarts in racing liveries sat like outgrown stuffed animals. There is some great potential for Smart as a small, city run-about. But one Smart stood out. The special edition Smart “forjeremy” is a regular Smart that has been “improved” by “designer” Jeremy Scott. Apparently you can actually purchase this version, wings and all, and drive it on public roads. Jeremy, if this Smart is really for you, please keep it to yourself. 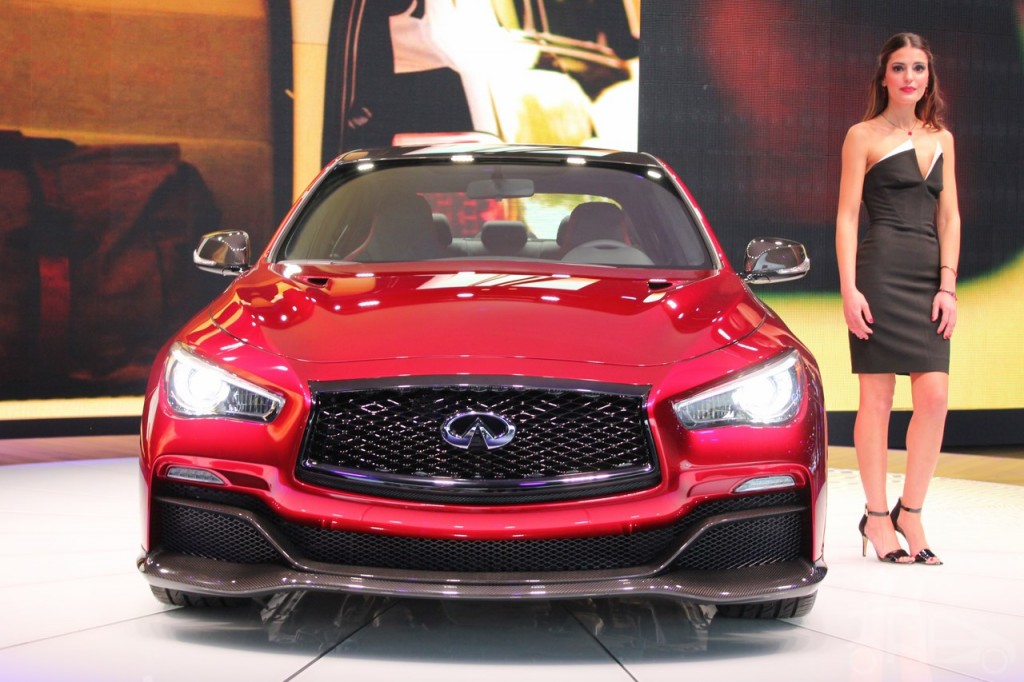 There are two things that manufactures are guaranteed to provide to the press on media days: free food and attractive “product specialists”. Call them specialists, models, or booth babes, their job is to pose with the vehicles and answer questions in a chipper yet I-might-not-actually-work-for-the-manufacturer kind of way. That means they’re standing on the same brightly lit, slowly rotating platform for hours on end. There’s no doubt that they’re dying on the inside, but looking unhappy doesn’t reflect well on the car. Unfortunately, even the bright red paint of the Q50 Eau Rouge couldn’t mask the discomfort of the women standing around it.

Cadillac has been on a roll recently. The ATS sedan brought some youth and vigor into a company that had a brand perception including cataract glasses and bench seats. They recently added a brand new CTS to further acclaim. So, as a whole, they were on track to drastically change their brand perception. And then, this; the “de-wreathed” Cadillac logo. Part of their identity since 1963, the wreath has been foregone to create a symbol of the “new” Cadillac. But Cadillac was doing just fine with that before. Now they’ve got with great cars adorned with a colorful logo larger than a Silverado bow-tie. 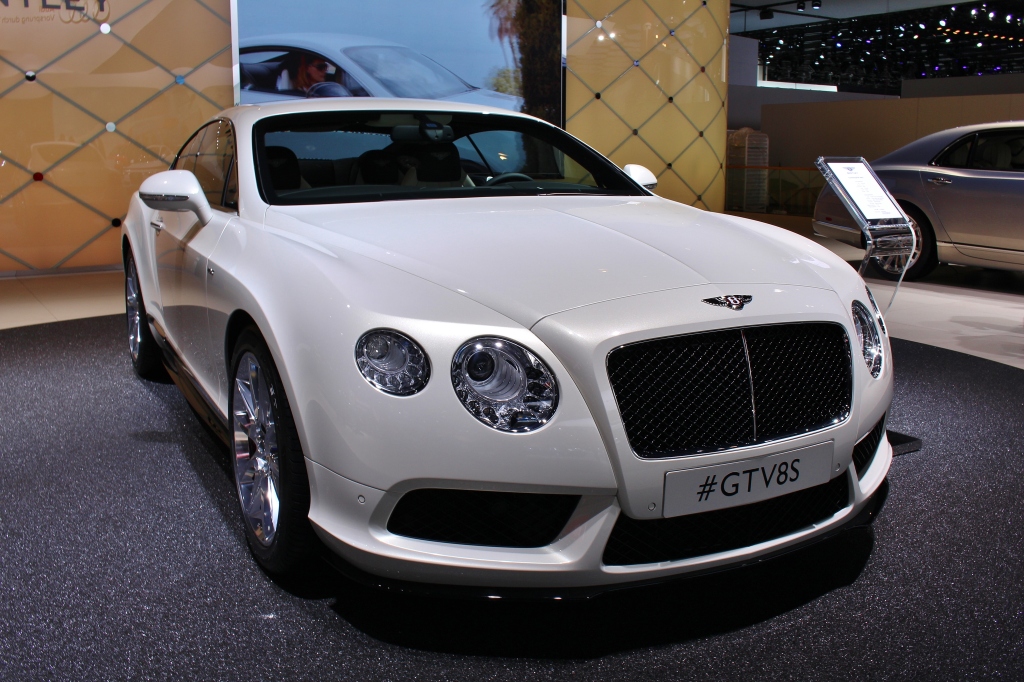 The Bentley Continental GT is the the resulting elixir of combining 100% performance and 100% luxury. It is a hand-built beauty with credentials rivaling a tectonic plate. But sometimes less is more, and the GT V8 proved that. It is lighter and better balanced, making it more potent as a performance car. Now that less has even more. The GT V8 S gets 21 more horsepower and 15 lb-ft more torque (for a total of 521 and 502 respectively), plus reworked suspension. The end result is a car that is 9/10ths of its big, W12-powered, brother. And that can never be a bad thing. 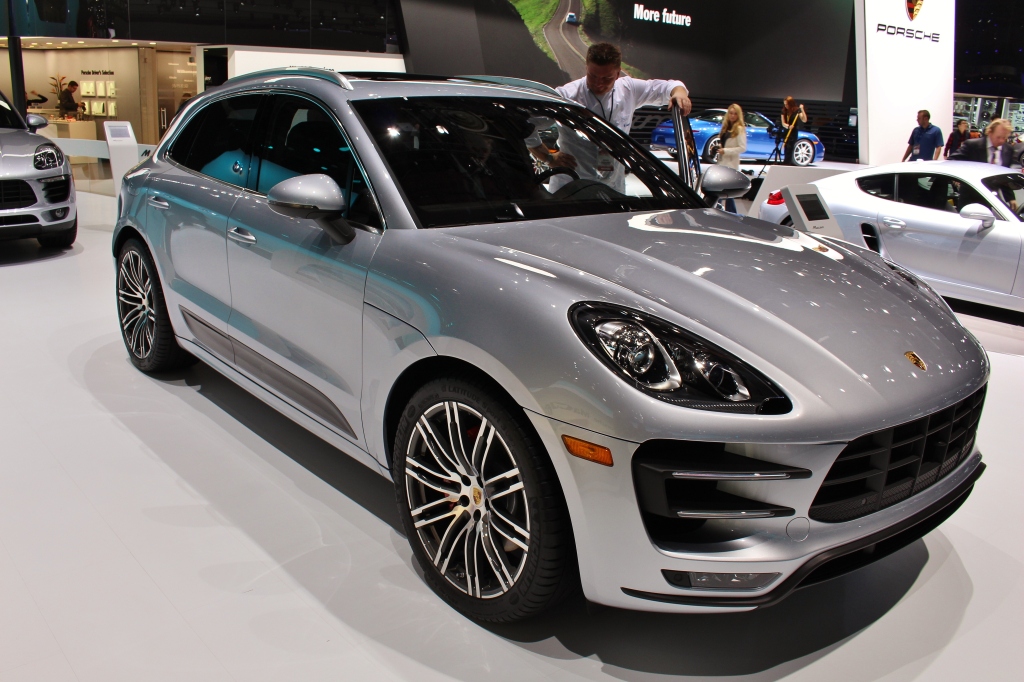 Admittedly the Macan, like the Continental GT V8 S, weren’t new debuts. But this was the first time our staff got to see them in person. And in person, the Macan is stunning. Don’t let anyone tell you that Porsche is only good at building 911s. The Macan will be a hit because it is unlike any other car in its segment. The S shares its turbocharged V6 with the 2014 Panamera S, which we found quite capable. There’s also a 400hp Turbo variant, which will undoubtedly frighten the small children strapped into its back seats. The swooping body, gaping maw, and imposing stance is both completely new and completely Porsche. Did we mention it has a clamshell hood?

Toyota has many interesting concept cars, but very rarely do they make enthusiasts sit up and take notice. The FT-1 Concept is one of those cars. The hopes and dreams of a Supra fan were forged with the technical achievements of the LFA in the fires of Mount Doom. It resulted in the most frightening and exciting thing to come out of Toyota in quite some time. A solid dose of reality is that this car will probably never make production. But with the recent collaboration between BMW and Toyota, something wicked could be brewing. Even if the FT-1 doesn’t make production, it proves that Toyota designers and engineers are willing to think big. And the resources and knowledge of the two companies combined could result in something very, very big.

Just like matte paint and chrome wheels can be bad, a paint color can be good. Some of the best new cars in Detroit were unveiled in hues of blue. It’s hard to be bad when the list consists of cars like the BMW M3, Audi S3, VW Golf R, Porsche 911 Targa, Lexus RC-F, and Subaru WRX STI. But we only have 5 “best” slots, so we lumped them all together under the most obvious thing they had in common. Besides, isn’t it time we moved past our automotive obsession with monochrome colors? 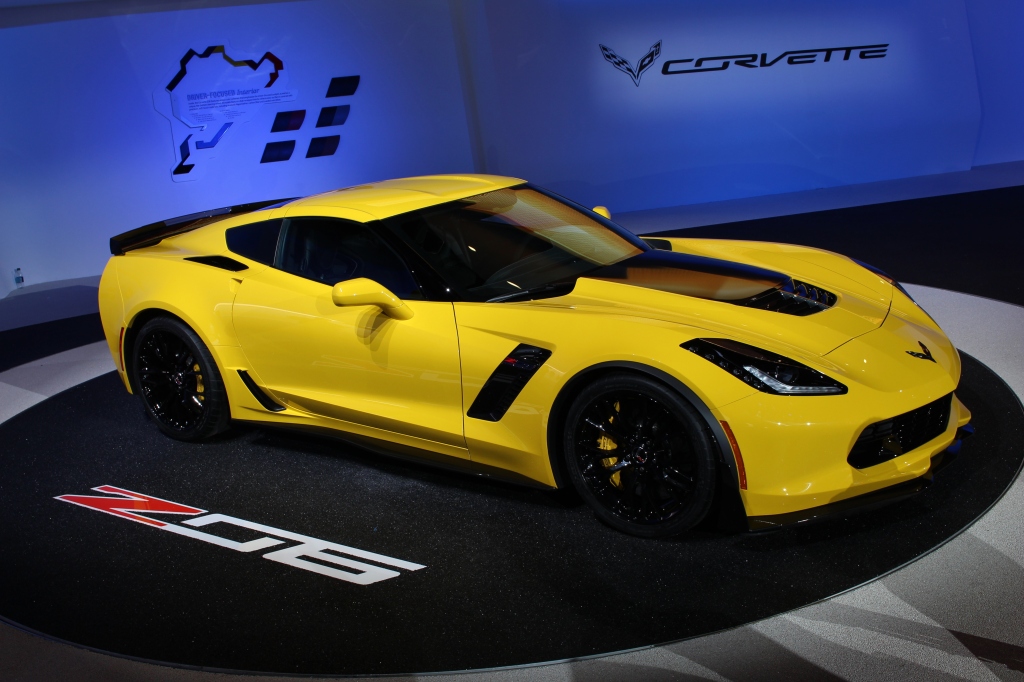 At its core, an all-new supercharged V8 cranks out 625hp, 635lb-ft torque. Outside, it appears to be bursting at the seams. It’s fender flares have fender flares. The new Z06 takes the C7 Corvette to the next level. The engineers at Chevrolet have outdone themselves. Some purists will hate it. A supercharger? An automatic transmission? Blasphemy. Of course, this happens with all new cars. But the naysayers will be wrong. They’ll find themselves drowned out in the collective praises of almost everyone who gets behind the wheel. The Europeans might scoff, but the Corvette has continually crept closer and closer to refinement. You can have a big, American, V8 sports car made Bowling Green, Kentucky just like always. This time, it will be able to compete with some of the best challengers of Britain, Germany, and Italy. Not only in power and performance, but in comfort, convenience, and technology.