The last time we were behind the wheels of the Porsche Panamera, it was warm enough to wear shorts. We were in Georgia to test the new Panamera at Atlanta Motorsports Park. This time, things were different. It was far too cold for shorts and there was no racetrack. There was only a Porsche Panamera Turbo and 25 inches of snow. That forced us to approach this review a bit differently. We had to be more grounded, a little less performance based, and a little more focused on the day-to-day. And we definitely needed a snow brush. This is what it’s truly like in the life of a Panamera owner.

We suspect that most Panamera owners don’t take their car to the track, where things like the Turbo’s all-wheel-drive system and air suspension are put to the test. But we did find ourselves in situations with more than 6 inches of uncleared snow on local roadways. This might be a situation that a Panamera owner finds themselves in and it also puts the Turbo’s all-wheel-drive system and air suspension to the test. “Admirable” best describes the poise that the Panamera exhibited when presented with the snow-covered roads of rural Upstate New York. Admittedly, it helped that its 20” Turbo II wheels came wrapped in Pirelli Winter Sottozero Serie II tires. The turbocharged 4.8L V8 is capable of spinning the tires in the best conditions. With 520hp and 568 lb-ft torque in overboost mode, that’s to be expected. In the snow, the Panamera can easily get out of sorts, but the traction control steps in to solve things fairly quickly. If you’re presented with a rather large pile of snow, simply raise the air suspension into its highest setting and the Panamera can work itself over with no problem. Once you reach a speed of 25mph, the suspension will automatically lower back to its Comfort setting for normal road driving.

This was a rather extreme week of weather. In our area, at least, we wouldn’t expect to see anyone out with a car that costs very close to two-hundred thousand dollars. But we were out in the morning commute with the Panamera Turbo just as everyone else was in their trucks and SUVs fitted with their respective all-wheel-drive systems. Needless to say it had drivers looking, and sometimes staring, at the person crazy enough to drive a sportscar in the winter. Just try and not develop an ego as people stealthily take photos of the Panamera Turbo in the snow. Even when we stopped to take pictures ourselves, passers-by stopped to take their own. The sheer attention this car received in the dead of winter is something that we won’t forget any time soon.

It was a week where clear roads were few and far between, but when we did find them, the Panamera did not disappoint. On one of the clearer days, we brought a few friends out to experience the Panamera Turbo. At the end of the day, they summed it up perfectly. The Porsche Panamera Turbo feels luxurious, sounds savage, and drives like something half its size and weight. Our tester was fitted with the Sport Package, adding a host of expensive acronyms and options; PDCC, PTV Plus, Sport Chrono, and Sport Exhaust. It’s a $7,490 option that we would check every time. Porsche Dynamic Chassis Control (PDCC) adds active anti-roll bars that keep the Panamera flat in the corners, adding security and confidence. Porsche Torque Vectoring Plus (PTV Plus) allows the inside rear wheel to brake in tight-turning situations, allowing the car to corner faster and provide more agility. The Sport Chrono Package adds the classic timepiece/digital stopwatch in the center of the dashboard as well as Launch Control and Sport Plus function. Lastly, the Sport Exhaust is a stainless steel system that can be operated with a simple button on the center console. Left deactivated, the Porsche is subtle and unassuming. Activate it, and it becomes a barking, bellowing monster. Porsche estimates a 0-60 time in the mid to low three second range. Unfortunately, the combination of snow-covered roads and winter tires meant that we couldn’t experience that to its full effect.

The Panamera Turbo’s interior arrived wrapped in gorgeous Carrera Red leather that added to its luxurious yet sporty appeal. 18-way power adjustable front sport seats and 8-way adjustable rear sport seats allow every passenger to be nothing but supremely comfortable and well bolsted, not matter what seat they were in. The seats are heated and cooled all around, but only the former setting was used this week. The lack of a heated SportDesign steering wheel was just fine with us. We’re more than happy with its minimalist, no-button layout, precisely weighted paddles, and perfect ergonomics. The touch-screen infotainment system worked exactly as you expected it to, and the mind-boggling buttonfest that is the center console is as intuitive and easy to use as it is beautiful to look at. The upgraded Burmester Audio System is simply stunning. In the name of testing, we listened to a number of songs at the upmost clarity and fidelity. We have to admit a bit of selfish glee at getting that portion of the review out of the way. The rest of the time, we just wanted to hear the burble of the Sport Exhaust. 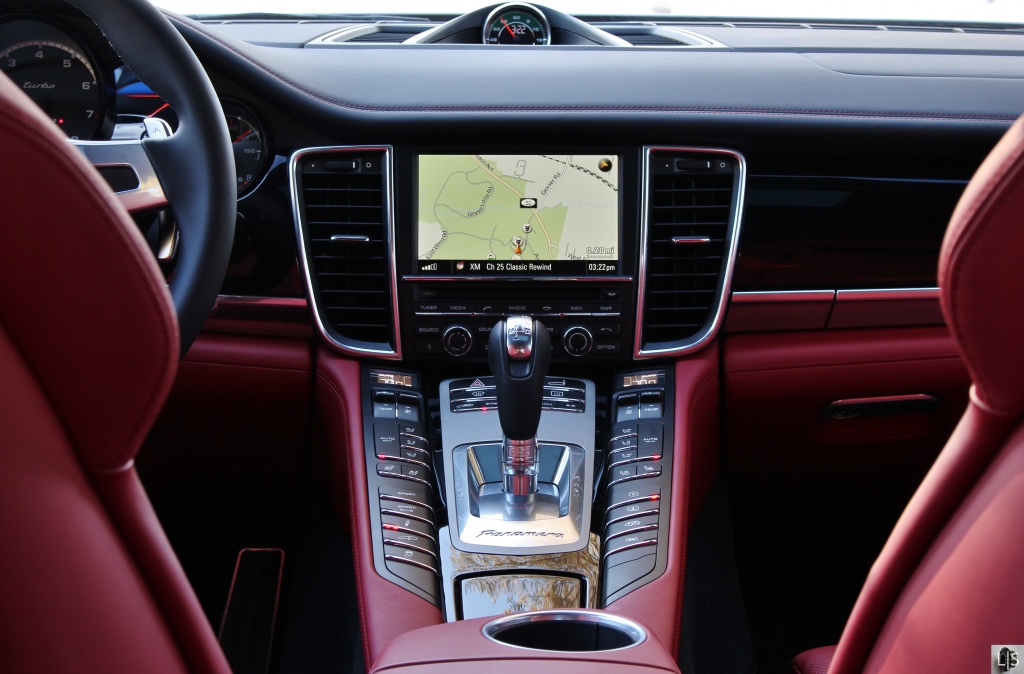 Porsche gave the exterior of the Panamera a thorough overhaul for 2014, including a new front bumper, headlights, rear window and rear bumper. The first generation Panamera never really settled well with us visually, but the updated design has us changing our minds. In person, you come to appreciate the classic Porsche design, and form-follows-function thinking. Also, after a week of driving, you do get a sense of the intrinsic nature of this sedan. All of Porsche’s heritage and racing history have been applied to a sleek sedan body. The standard Porsche levels of quality, craftsmanship, and attention to detail are all present. 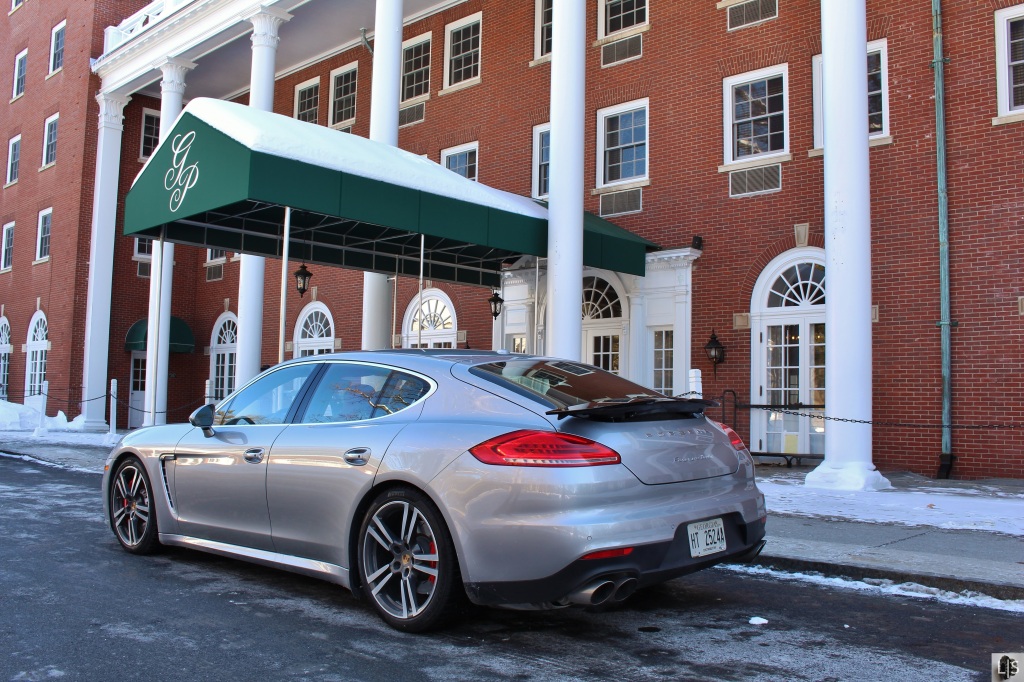 As we expected, the Panamera Turbo succeeded everyday livability. The twin-turbo 4.8L V8 produces 520hp and 516lb-ft of torque, which is just enough to get you to work on time. We jest: this car is fast. It accelerates like a race car yet remains as stable and linear as a freight train. In our week of mixed driving, and mixed conditions, we averaged 17.8mpg, just under the combined rating of 18mpg. Not frugal, but respectable in our eyes for a car that was either slogging through slush or stretching its legs at the faintest hint of a clear road. 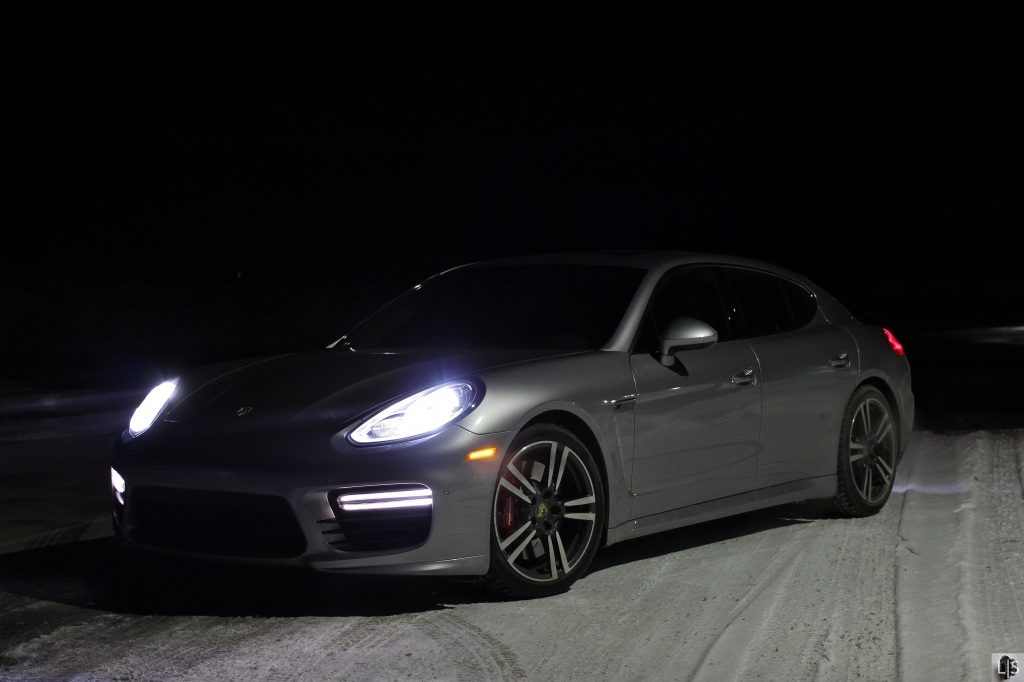 To some, a four door Porsche is sacrilege. Porsche knows that people love their sportscars, and they know that a company cannot survive only selling sportscars. If you meet someone driving a Cayman or 911 through the conditions we managed with this Panamera, give them a pat on the back. We wouldn’t have done it. Thus, the Panamera, Cayenne, and soon-to-be Macan, have entered into the marketplace to provide more versatile Porsches. Fortunately for all of us, the Panamera Turbo is excellent in its own right. You don’t realize it until it leaves you, but the Porsche Panamera forces you to rethink of what it means to be a sportscar. This four door sedan does it all, and it does it all brilliantly.