2014 was a huge year for Porsche, punctuated by the 50th anniversary of the iconic 911. They, of course, rolled out the very popular and very pretty 911 50, which highlighted the heritage and design elements of the last 5 decades. However, Porsche also introduced the Targa variant of the 991 911. The Targa remains a niche choice among Porsche 911 fans, comprising 3 of the 21 variants currently available and comprise for about 10% of the entire 911 take-rate. It wasn’t just an anniversary for Porsche, either. We celebrate our third year as an organization this week. A stroke of good luck meant our time with Porsche’s 911 Targa 4S coincided with our own small celebration. 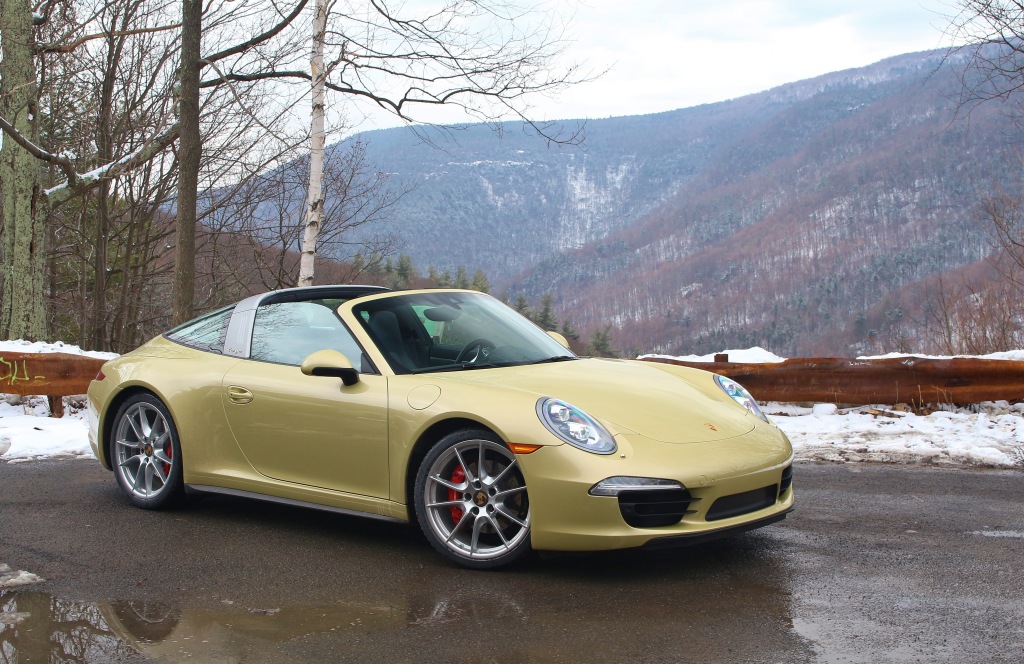 A Lime Gold Metallic 911 Targa 4S arrived for the spring equinox, marking the turning point at which we Northerners finally begin to thaw. Unfortunately, Mother Nature didn’t get the message. Arriving on Pirelli PZero summer performance tires that weren’t doing the 911 any favors, we were concerned about repeat of our GTI experience. Porsche suggests winter wheels and tires for conditions that are below 50 degrees on average. After a day on the Pirellis, and knowing how good a Porsche on winter tires can be, we’re inclined to agree. You might not want to believe it, but you can drive a 911 every day of the year. We might even argue that the 911 Targa 4S is the best year-round 911 that Porsche offers, provided it is properly equipped. 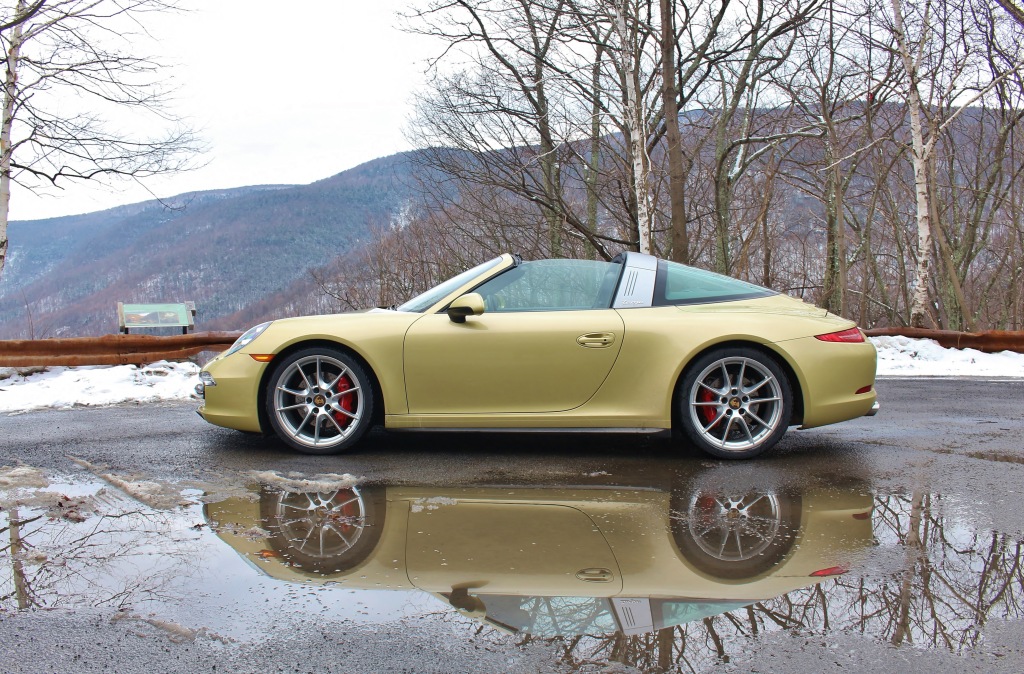 Porsche North America offered a solution in the form of an appointment with our local Porsche dealer. We’ve said time and time again that tires can make or break a car, and Porsche agrees. They spend a large amount of time and money working with tire manufactures to develop tires that achieve the coveted “N” rating. N-spec tires have been tested and approved by Porsche engineers for use on their cars. After a quick stop at New Country Porsche of Clifton Park, we were back on our way with a fresh set of Carrera S wheels and Michelin Pilot Alpin PA4 N-Spec performance winter tires. 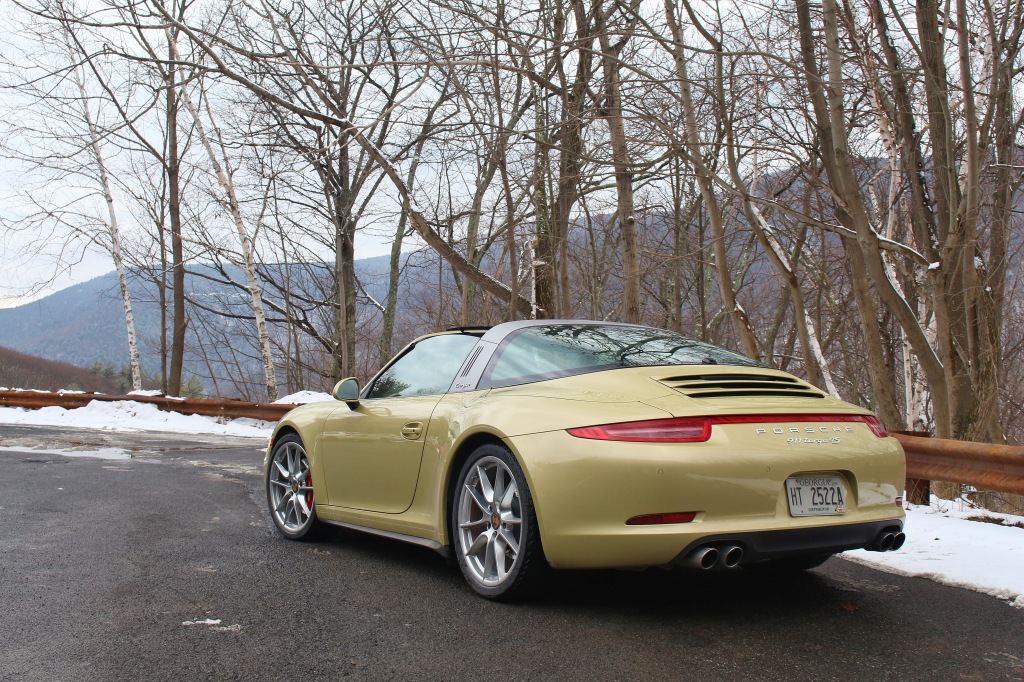 Not only was the change immediately noticeable, but with winter weather on the way, it was welcomed. A wintry mix of snow and freezing rain allowed us ample opportunity to explore the limits of our newly-acquired winter tires. More importantly, it gave us the peace of mind to pilot the all-wheel-drive 911 with confidence. The all-wheel-drive system in the Targa 4S, and all other 4 and 4S models in the 991 lineup, is derived from the previous 997 Turbo’s Porsche Traction Management system. In normal driving conditions, the power is directed to the rear. Under normal conditions, the rear wheels do 100% of the work. As conditions dictate, PTM routes power to the front wheels. You can watch this real-time on the torque-vectoring display screen in the gauge cluster. Porsche claims a sub 100-millisecond power transfer to the front axle. Whether we were driving over a mountain pass or making some donuts in Limited Slip HQ’s unplowed parking lot, you can feel it working. PTM allowed us to have fun and be safe at the same time.

The design of the new 991 Targa marks the return of the Targa bar, a design element missing since the classic 964 over 20 years ago. The top, however, is thoroughly modern. More convertible-like than ever, the roof is fully automated and opens or closes at the press of a button in under 19 seconds. During that time, onlookers are absolutely staggered as the entire rear of the car lifts up and pivots down over the back of the car. With the rear levitating, two sections of the Targa bar open to allow room for the roof to lift and neatly fold into a compartment behind the rear seats. Once stowed, the Targa re-assembles itself. This complex feat of engineering does come at a price; there’s an additional 242 pounds under the Targa’s sexy skin. With the top up, it is no less effective than the coupe. With the top open, it is nearly as airy as the convertible. It may be the best compromise ever, offering a solution for every weather condition with very little consequence. 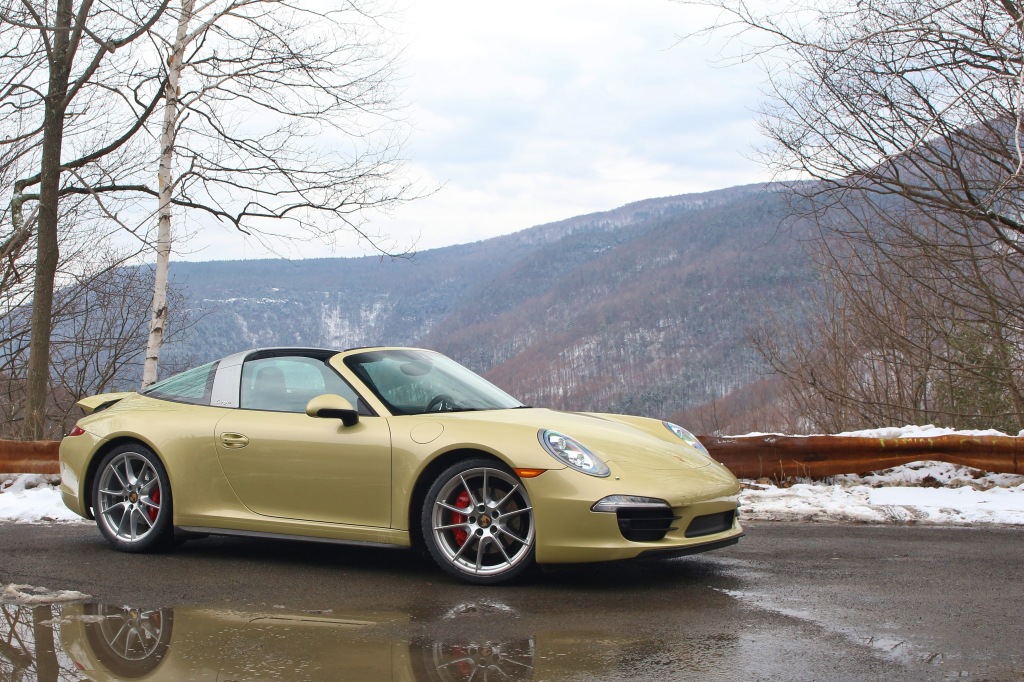 Inside, the Targa shares its layout with all other Porsches. Be it Cayman, Macan, or Panamera, all the switches are in the same spot. Seeing as the 911 is the most senior model, that means every Porsche you drive feels, somewhat, like a 911 from the driver’s seat. Additions such as the full leather interior package, premium package, Bose audio system, and 14-way power seats allowed us to be comfortable at all times. The sum total of optional extras on our Targa rang in at just under $33,000. The Golf GTI we just tested was less expensive than that, but we’re arguing that the Targa 4S is the only car you’ll ever need, so why not? 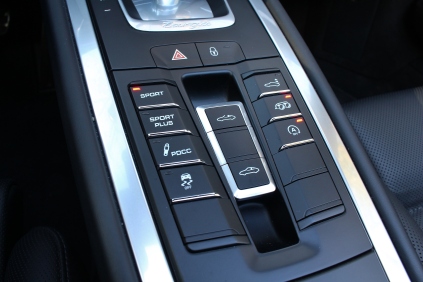 The general public, in Upstate NY, doesn’t expect to come across a Lime Gold Metallic sportscar with a missing roof in the middle of March. Apparently it was an affront to their perceived common sense, judging by the pointing, staring, and honking we encountered. With temperatures ranging from 25-38F, a hat and light pair of gloves were enough to keep us from freezing. The Targa’s extendable wind deflector prevents almost all wind buffeting at speed. With the heat blowing, heated seats toasting, and windows up, we couldn’t find any excuses to close the top. It’s possible to have a civil conversation in the cabin at speed – a fact that was vital during the rides we offered friends and family to assuage their fears that hadn’t, in fact, gone insane.

From a numbers perspective, the 911 Turbo S puts the Targa 4S to shame. But that’s because the Turbo S is a numbers car. It’s a sprinter at the line just before the gun goes off; frenetic and twitchy. The Targa 4S isn’t a numbers car. It exists for the theatrics – the sights and sounds and smells – of driving. Unlike the Turbo S, you can put your food down for more than 3 seconds at a time. And the more time you spend with your foot down, the more time there is to take it all in. It was on the second day of spring that we experienced this most vividly. A local friend of Limited Slip offered to pull the roof off his 1991 911 Targa and join us for a morning ride through the mountains. What better way to welcome spring than a pair of topless 911s?

Natural aspiration is a wonderful thing in a roofless car. 400 hp and 326 lb-ft explode unabated from the 3.8L flat six. There are no turbochargers to muffle this 911’s optional sport exhaust. The spine-tingling sound crescendos as the flat-six screams to 7,400 RPMs. Porsche’s PDK gearbox summons another gear immediately, signaled by a retort from the exhaust and another surge of speed. In moments of throttle-lift, the 911 pops burbles satisfyingly. In those moments, we can hear the 964’s air-cooled flat-six thrumming up the mountain behind us. 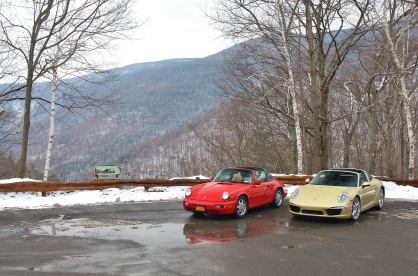 This Targa may have the optional Porsche Dynamic Chassis Control (PDCC), which stiffens the dampers for shaper handling, but we’re not using it. The roads are scarred from the winter beating and we’re out here to enjoy ourselves. We also largely ignore the Sport Chrono Package’s Sport Plus and Launch Control features. Those are all-out every-tenth-counts features that don’t apply in the moment. For now, we are content to climb, switchback, climb again further into the hills. We literally lost track of time, aided by the stuck hour-hand on the Targa’s Sport-Chrono clock.

The 911, in all its forms, is a spectacle to be enjoyed, driven, and shared. The engine’s placement is an omnipresent consideration to an attune driver. But it’s a sensation that is recalled fondly during a spirited drive, not an omnipotent fear. The Porsche 911 resets your thoughts and feelings on the definition of a sportscar. It is the half-century old yardstick to which many things are measured. It is a car worth celebrating, and Porsche has done just that with the Targa 4S. We’re fortunate enough to be able to celebrate our anniversary with it.