It’s always a special day when you’re seated behind the wheel of a 500+ horsepower Italian sports car. The feel of the carbon fiber wheel and column-mounted paddle shifters in your hands offers a tactile hint of the performance that awaits. A press of the wheel-mounted start button and the twin-turbocharged motor barks to life. You’re off the the hardware store for some new garden furniture. Life with the Alfa Romeo Stelvio Quadrifoglio can sometimes be a confusing mix of sensations. But the driver is better off for it. 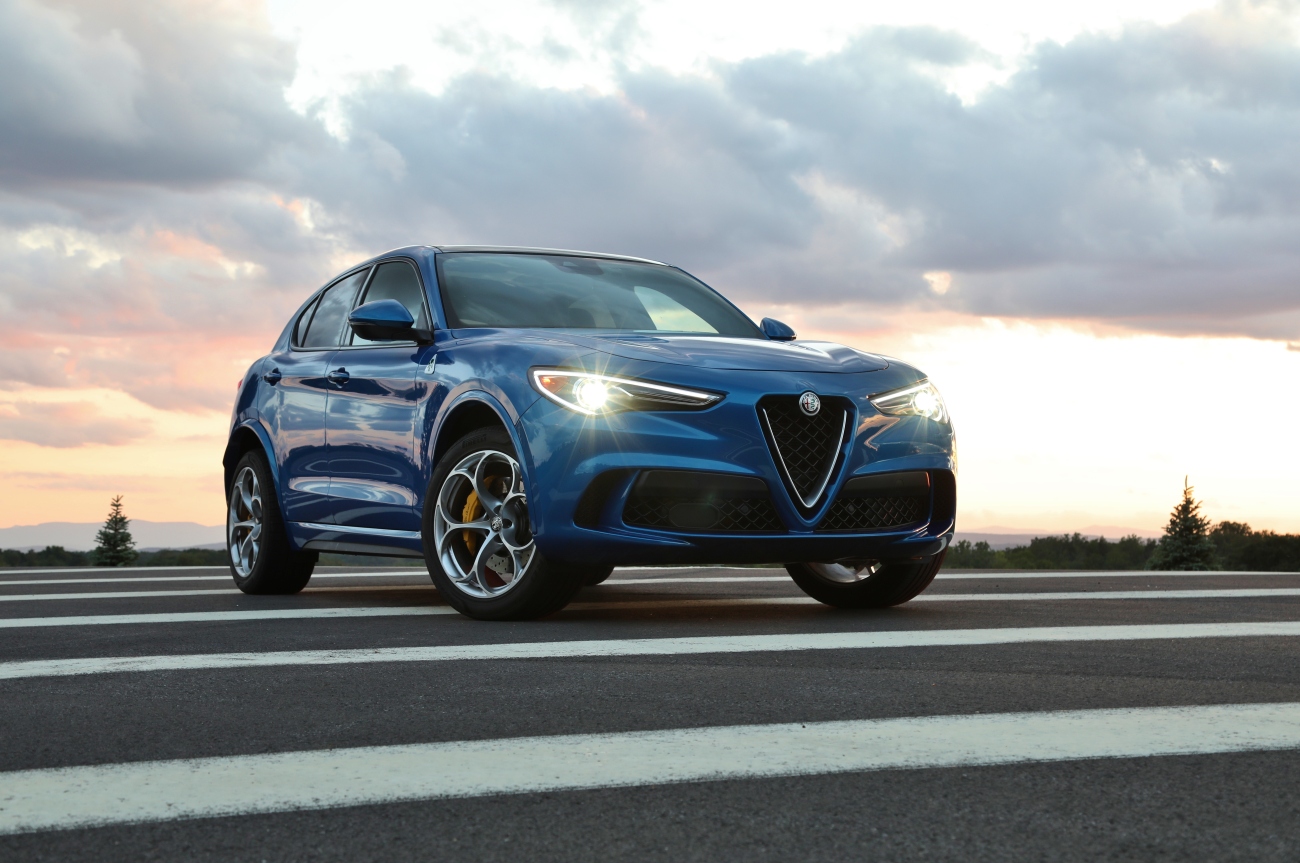 A sister to the Giulia sedan, the Stelvio sits on the same platform, with some extra ride height and an all-wheel-drive system stuffed below. The important part of the Quadrifoglio, its Ferrari-derived 2.9L biturbo V6, remains the same. With 505 horsepower and 443 lb-ft torque, this SUV puts an emphasis on sport. Alfa’s Q4 all-wheel-drive system sends all the power to the rear wheels in normal conditions. From there, the torque vectoring rear differential distributes torque to each rear wheel separately for maximum power transfer to the ground. As needed, the Stelvio QF’s transfer case can send up to 50% of the torque to the front axle. This gives the Stelvio a performance car feel with the benefit of all-wheel power delivery. 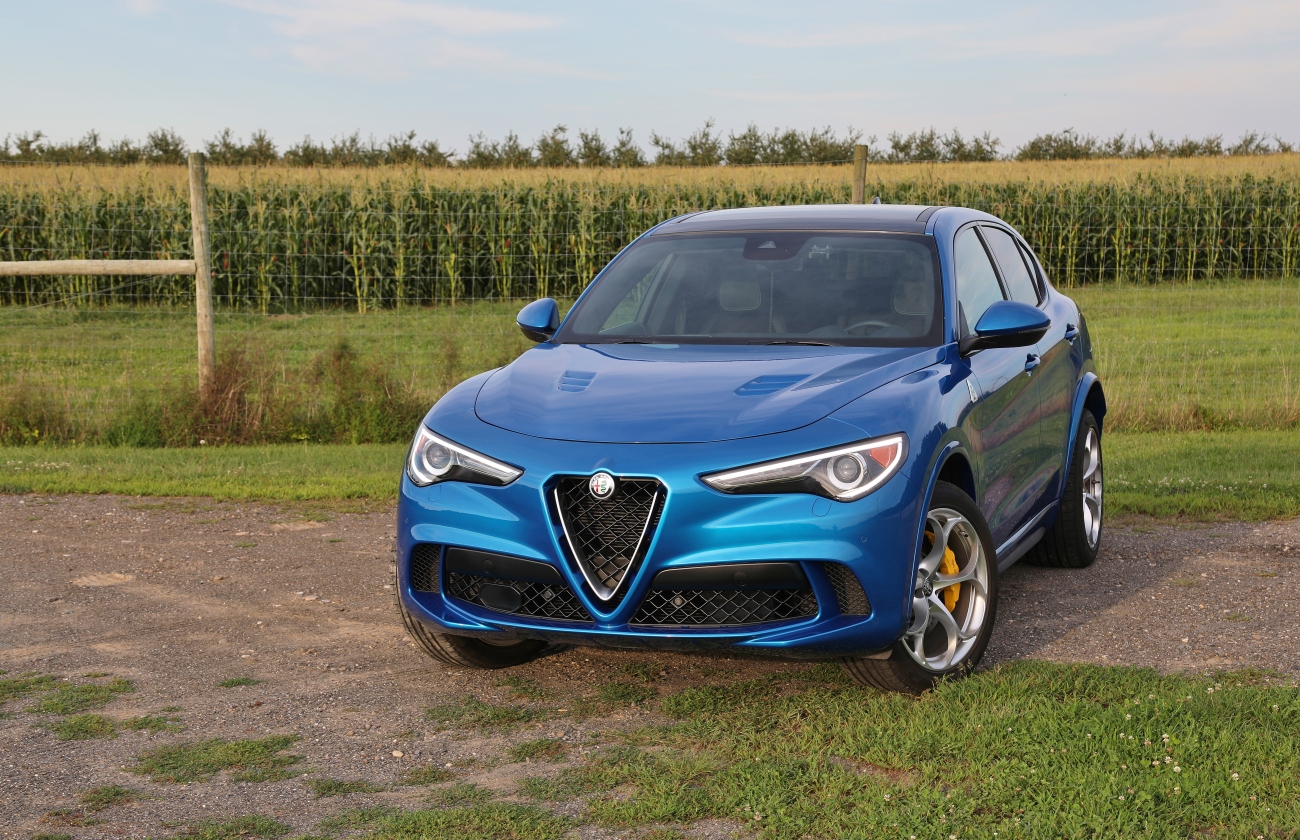 Sitting high in the supportive and well-bolstered seats, the Stevlio doesn’t suffer from the poor visibility of some vehicles in the segment. But while the driver’s touch points are a blend of high quality materials, the interior experience on the whole doesn’t live up to the luxury brand expected of the $86k as-tested price. It’s the little things that add up, such as the budget-feel of the air vents and infotainment knobs. We were equally frustrated with the two switches for the dual-pane sunroof. The controls for the shade and the sunroof operation sit next to each other with imperceptibly different symbols. We guessed incorrectly more often than not. Finally, Alfa refuses to use FCA’s UConnect software, one of the best in the business, even with an upcoming system update and new screen coming next year. Despite this, we didn’t have a single software or electrical issue. Others have complained about such issues in early vehicles, but we have it on good authority that  Alfa has quietly spent a lot of time working on improvements in that area. 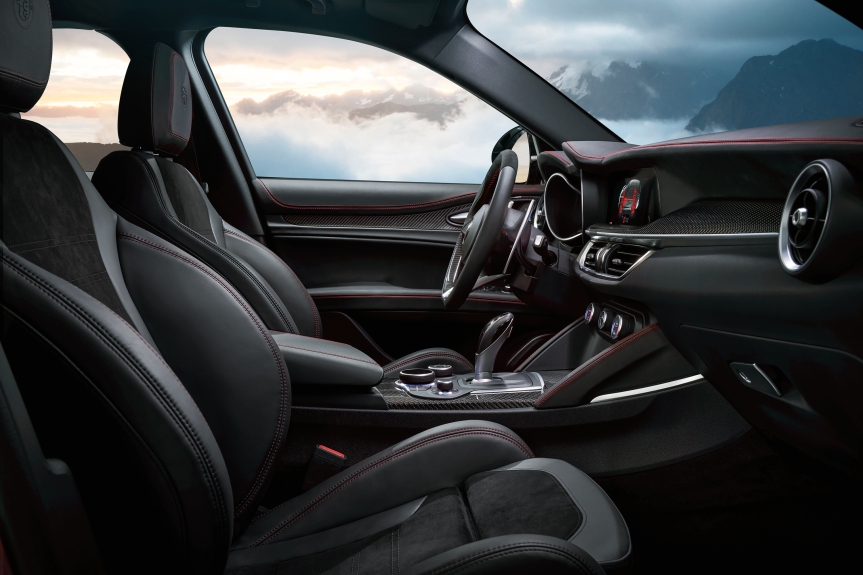 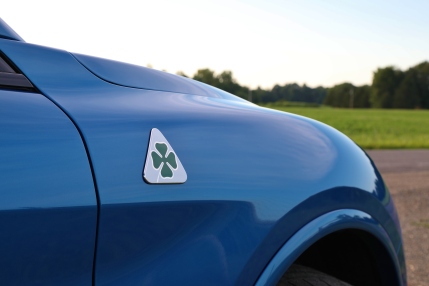 The interior experience couldn’t matter less once the boost kicks in. After a moment of lag, the Stelvio takes off. Shifts from the 8-speed transmission snap off with a crack from the exhaust. The Quadrifoglio’s unique suspension tuning and adaptive dampers keep the tall body nearly as flat as the Giulia sedan. Alfa’s drive controls allow fir independent setting of the drive mode and damper settings. Our optimal on-road configuration was in Dynamic drive mode with Normal dampers. This provided maximum throttle response and high-RPM shift points to keep the V6 spinning in the boost with a bit less harsh of a ride. In the firmest damper setting, the Stelvio punishes its occupants over anything but a freshly paved surface.

If there’s a crack in the Stevlio Quadirfoglio’s driving credentials, it would be the brake pedal. The brake-by-wire system and carbon ceramic brakes give an artificial feel in every-day use. Shortly after our week-long test, we had an opportunity to test the Stelvio Quadrifoglio on the track at Monticello Motor Club. If the suspension felt stiff and brakes felt artificial on the road, the Quadrifoglio attacks the track unlike any other SUV in its price bracket. Case and point, it closed the gap following a Jeep Grand Cherokee Trackhawk in all but the long straights. That’s a testament to the engineering beneath the Stelvio’s skin.

Startlingly fast and rather bold in electric blue with yellow calipers, we laud the Alfa’s performance credentials. It’s clear that most of the budget has gone to that singular goal. But at it’s price point, there comes an expectation of a luxury experience that Alfa doesn’t quite deliver. And with plenty of competitors that trade a few tenths in performance slightly more space or higher quality materials, it means that the Alfa Romeo Stelvio Quadrifoglio isn’t for everyone. But we certainly wouldn’t turn down more time behind the wheel.