Subaru’s BRZ Series.Blue is a confusingly-named, 1000-unit limited edition model; 500 Crystal White Peal and 500 WR Blue Pearl 2015 models will be made. Wearing STi-badged aero components, STi-badged black painted wheels, and even an STi-badged start/stop button, but not sporting any actual STi mechanical upgrades, it is a bit of a sheep in wolf’s clothing. For what it’s worth, the upgrades and new underbody panels do increase front downforce and reduce drag. 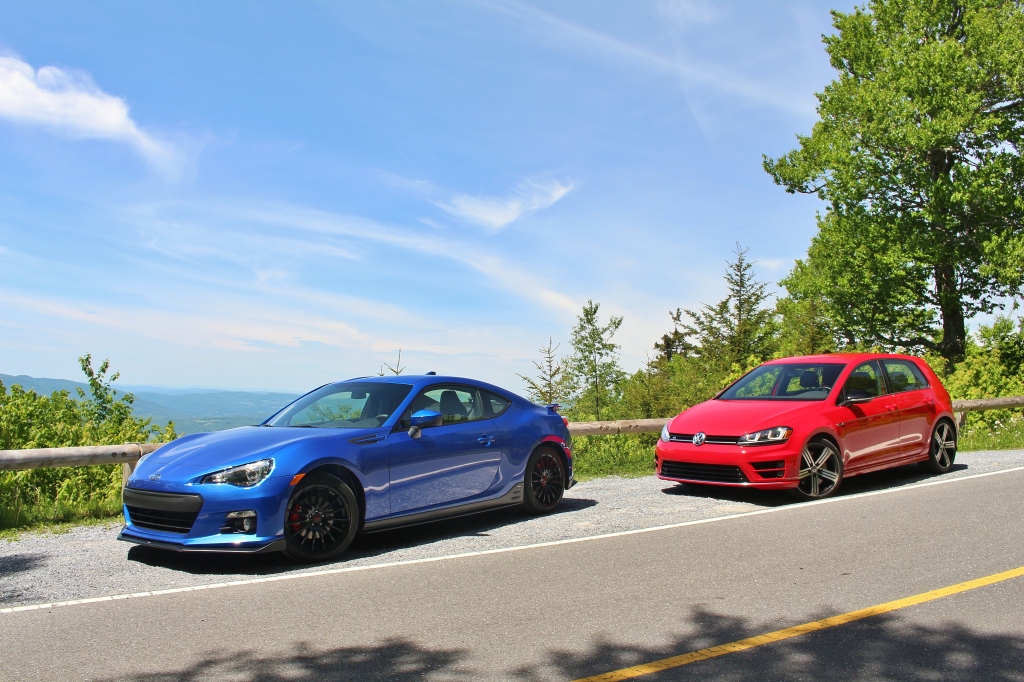 We found ourselves heading towards the New York-Massachusetts border in homage to our first Limited Slip Blog adventure. Three years prior, we had ascended New Hampshire’s highest peak, Mount Washington, in the Hyundai Genesis Coupe. This week, with a BRZ Series.Blue and a VW Golf R at our disposal, we planned a day trip to Massachusetts’s highest peak, Mount Greylock.  At 3,491 feet above sea level, Mt. Greylock reaches just over half the elevation of Mt. Washington. The seasonal road to the summit is much easier on the car and much closer to home.

Tight, winding roads are where the BRZ is in its comfort zone. The 2.0L boxer engine forces you to use every bit of the 7400rpm redline. Peak torque, 151 lb-ft, arrives at 6400rpm and all 200hp are available up to 7000rpm. The BRZ is designed for this power delivery. The 6-speed manual uses close ratios and a short-throw shifter to allow frequent, articulate gear changes. On these magnificent roads, it keeps the driver busy in the best sort of way. You can do nothing but drive the car, a well-choreographed dance across three pedals, one gear lever, and the steering wheel. Still, straightline acceleration is not its strong suit. Every time the road stretches out ahead, the red Golf R easily slips past. If the span of straight road is too long, 6th gear acts as overdrive, dropping the revs down and quieting the cabin for highway cruising. 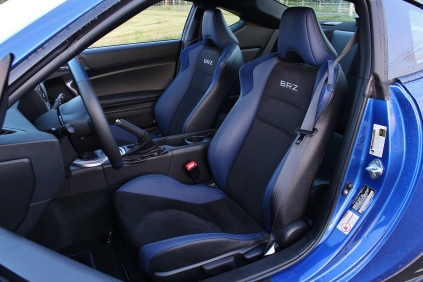 Inside, the BRZ is about as spacious as a car that stands 4’ tall can be. The cabin, with its Series.Blue exclusive blue accents and new-for-2015 simulated carbon-fiber dash panel, has room for a 6’2” driver. The back seats aren’t usable for anyone with legs, but the seats do fold down and provide enough storage space for four BRZ-sized tires and some equipment. Everything about the BRZ was designed to be low. The boxer engine and rear-drive configuration allow for the engine to be set lower and further back than a typical engine. The front struts are engineered to minimize the height of the aluminum hood. All you see gazing forward are the bulging front fenders.

When we first experienced the BRZ platform, in Scion form, we dubbed it the perfect enthusiast starter car. It provided entertainment even in the shadow of a Porsche Cayman S. We found it more engaging than a Ford Fiesta ST. It teaches proper car control and good driving habits. Despite having electric-assist steering, the weight is spot on and the feedback speaks volumes about the road below. This car is famous for sharing its tires with the Prius, but the lower threshold of grip and limited-slip differential beg for exploring those limits. As we climbed the elevation, the road switched back over itself multiple times. Rocky cliffs form a solid wall to my right, expansive views flash in-and-out of the trees to my left. With the windows down and the engine humming, you couldn’t have paid me to get out of the driver’s seat.

The BRZ is perhaps most rewarding as a palate cleanser, a big reset button in an artificial automotive world. There is no added complexity. It doesn’t need a trick electronic differential to help it turn, fancy adjustable damper to hide its weight, or flash forced induction to make it exciting. You get as much from the car as you can put into it. Giving the Subaru 110% yields 110% percent. And on this particular Sunday afternoon, I could do just that. In many ways, the Subaru BRZ shares the same ethos as the Mazda MX-5 Miata. It’s about simplicity, low weight, and driving enjoyment. I didn’t have 500 horsepower under the hood. I didn’t have an exhaust note capable of turning heads. And I certainly wasn’t going to win any acceleration tests with the Golf R around. But on that particular Sunday, I was the happiest guy around because I remembered.