Hype can be a dangerous thing. With hype comes expectation, often set higher by the heritage and pedigree of the past. Yet we often look to the past with rose colored glasses, nostalgic for the good times without remembering the faults. It doesn’t take but a passing glance at Hollywood’s recent feature films to see this play out. Sometimes they land well, bringing a fresh idea or new take on the old classics. Other times it falls short, leaving you unfulfilled and bitter. I wouldn’t mind a few more like Rogue One: A Star Wars Story or Jumanji: Welcome to the Jungle and a few less like Indiana Jones and the Kingdom of the Crystal Skull or 2019’s The Lion King. Here then, in the midst of all those marketing dollars scrambling to cash in on the nostalgia craze, is the all-new 2020 Toyota GR Supra. The timing seems just right, this being the first Supra on US shores since 1998. Previous owners’ families have likely matured past the need for car seats and the Gran Turismo generation finds itself with disposable income. Has Toyota delivered a sports car worthy of the hype? 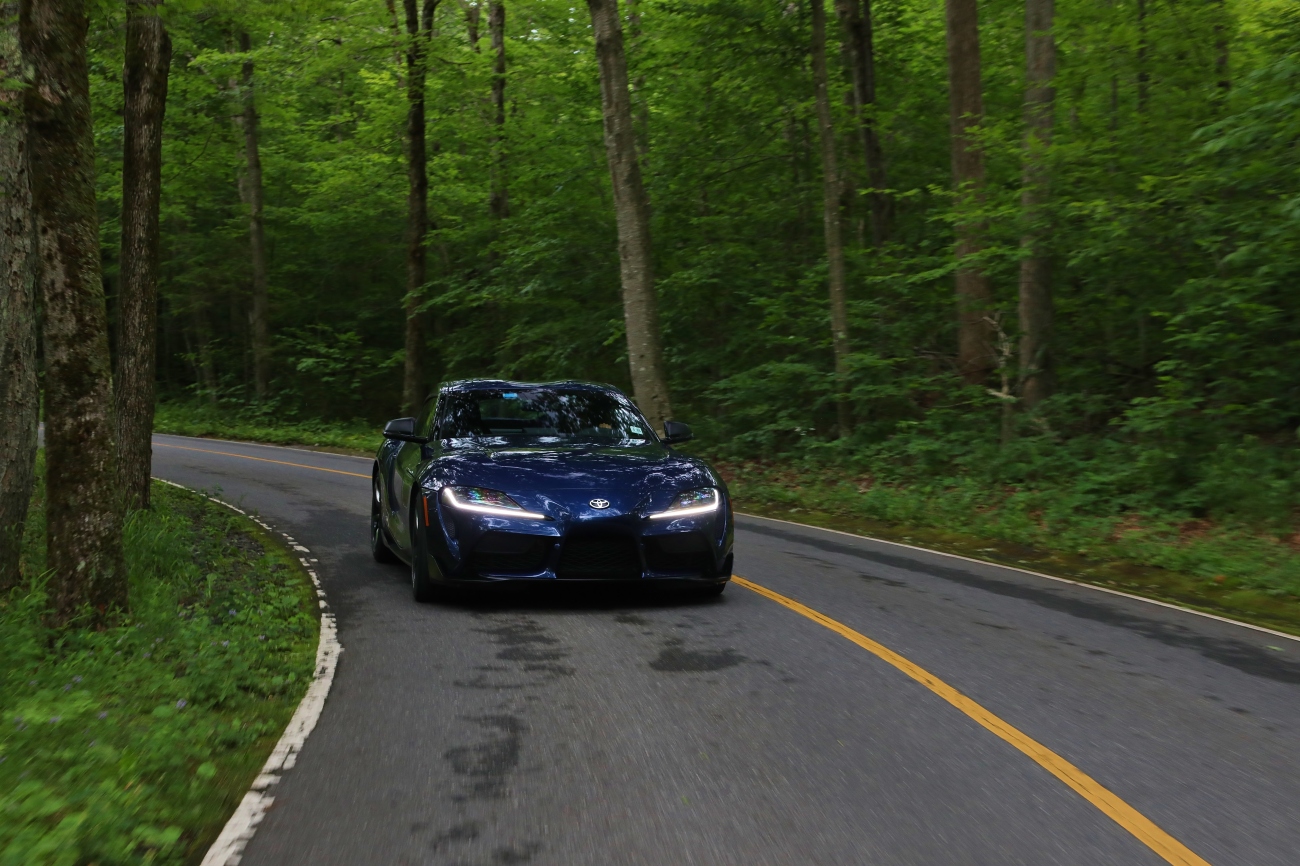 Debuted at the 2019 North American International Auto Show, the fifth generation Supra takes on the styling cues of the 2014 FT-1 Concept. Like Toyota’s last sports car endeavor, the Toyota 86, the Supra was developed in collaboration with another automaker. It wouldn’t be a Supra without an inline-6, and nobody produces as many I6 engines these days as BMW. As far as partnerships go, the Supra takes a lot of flack for its Bavarian elements. But as a previous BMW owner of 15 years, I couldn’t think of a better set of parts bins from which to pick and choose. Launching with a 3.0L twin-scroll turbocharged engine producing plenty more than its rated 335 hp and 365 lb-ft torque, it can sprint to 60 mph in 4.1 seconds. The 8-speed ZF transmission and active rear differential distribute that power to the rear wheels. And while parts from BMW can also be recognized in the key fob, steering wheel, gear lever, heads-up display, and infotainment system, the Supra’s character is 100% Toyota.

We returned to the Mount Greylock Scenic Byway with the blue Supra and a red Mercedes-AMG C63 S Cabriolet to test both cars on the winding mountain pass. Our last red-and-blue adventure with the VW Golf R and Subaru BRZ Series.Blue reminded us why we love driving. This pair, we hoped, would surely do the same. With a 50:50 weight distribution, lovely steering feel, and responsive throttle, the Supra is a joy to drive on the road. The torque from the turbocharged engine kicks in early and propels the Supra through elevation with ease. Long sweeping corners and sudden direction changes are similarly handed  as the Supra is eager to change direction. The ZF transmission shifts crisply as commanded by the steering-mounted paddle shifters. In Sport, the Supra’s crackling exhaust sends pops and burbles echoing off the rocky cliffs. But Sport Mode can also have its drawbacks. Toyota’s suspension tune is fairly stiff, only to get firmer in the Sport setting. More than once when the suspension was loaded up through a tight uphill bend, a mid-corner bump was enough to upset the car and sent it off line. We’d like to see a more progressive damping rate to prevent feeling like we’re crashing against the bump stops with nothing but a guardrail between us and the cloudy morning sky. But when things do go a bit sideways, the Supra’s firm and progressive brake pedal offer more than enough confidence to stay in the throttle longer or carry more speed through the byway’s gravity-assisted decent.

Its a little over a 90-minute ride home from the summit. With the early-morning sky-climb antics out of our system, there was more time to reflect on the Supra’s cabin. There’s a satisfying Porsche Cayman-esque feel to the way the cabin wraps around the occupants and stretches out over the rear hatch. It provides excellent visibility to the car’s corners. As we also learned this day, the rear hatch is sufficiently spacious and supportive enough to fit a 250-lb photographer for some rolling shots. The Supra Premium’s leather seating surfaces and other up-market materials make it a nice place to spend time. But we were bothered by the fixed lumbar positioning of the sport seats and the limited interior storage space for things like sunglass cases, wallets, and face masks. 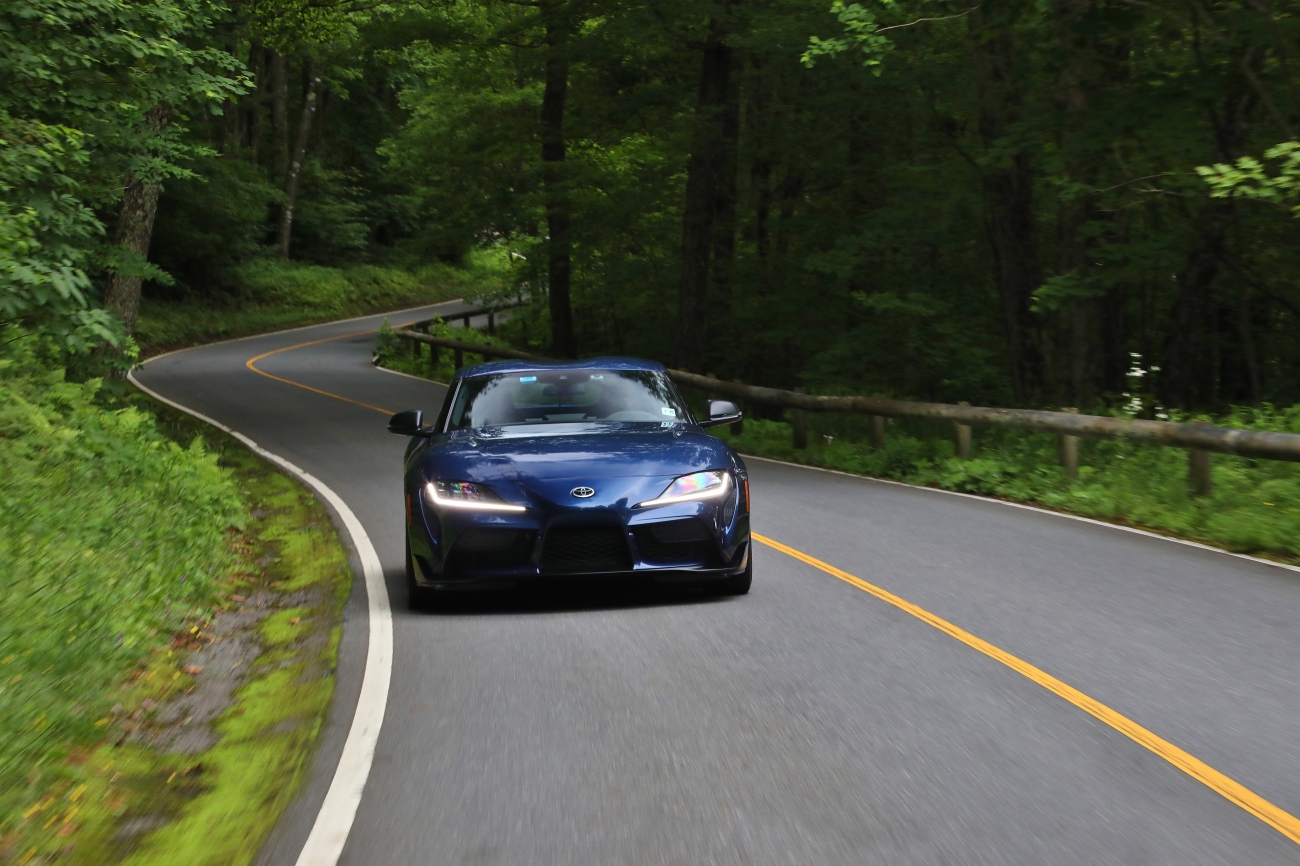 Perhaps one of the most puzzling things about this new Supra is that there are just some things that don’t feel very, well…Toyota-like. And they’re all things that Toyota had entirely within their control. In Sport mode, the 1-2 shift seems programmed to be artificially rough, as if to provide the simulation of a power shift. There’s also the incessant wind buffeting with the windows down, making it impossible to enjoy the cool morning air while you drive. How on earth did a vehicle design make it to production with such a glaring flaw in a world of modern 3D modeling and CFD analysis? And as previously mentioned, everyone that spent an extended time in the Supra also complained about the seats. We can’t quite put our finger on it, but the hard hip bolsters on the seat bottom and fixed lumbar angle of the seat backs were both mentioned in the LSB crew’s testing notes. Finally, we’re willing to forgive a few artificial vents here and there, but the Supra puts even the Honda Civic Type R to shame in that regard. Such a flowing, unique, and shapely design caused more than a raised brow on closer scrutiny. Fake door vents, Toyota?

Perhaps the most objective way to judge the Supra is against its competitors. It’s traditional Japanese competition, the Nissan 370Z Nismo, is prehistoric by comparison. Despite its engaging driving experience and lower price tag, it’s nearly a second slower to 60 mph. Perhaps try something from Nissan’s luxury brand, like the Infiniti Q60 Red Sport. Closer in real world performance, fit and finish, and price tag, it lacks the sporting demeanor of the Supra for a more GT-focused experience. That leaves a few American rear-wheel-drive coupes in the Supra’s competitive space. Depending on how you build them, you could find yourself behind the wheel of a Chevrolet Camaro SS 1LE or Ford Mustang GT350 for very nearly the as-tested price of our Supra. Both models will equal or better the Supra, feature boisterous V8 soundtracks, and can be had with manual transmissions. But they’re harder to live with on a daily basis due to their track-ready tires and suspension.

In the early morning hours, the Supra’s unique and stunning silhouette cut through the clouds with the right balance of comfort, control, and character. A sublime road car capable of turning heads through its looks and its sound, both paying homage to the generations that came before it. It is a respectful and innovative next generation of Supra, born from a collaboration that did more good than harm to its reputation. In the time spent up and down the mountain, cruising with a small group of like-minded friends and their rides, the Supra was in its element. Sure, it has its share of flaws. We can’t wait to get our hands on the revised 2021 Supra to see if they’ve been tuned out. But its important to keep in mind the perspective of the past. The performance, capability, affordability, and poster-ready good looks of this new Supra has the chance to inspire another generation of Supra fans. And they too, one day, will likely look back on it fondly.