There are only a few car cultures strong enough to support their own wave. Subaru’s WRX and STI owners never fail to acknowledge each other, a statement to the appeal of the cars they drive. For 2018, Subaru has enhanced the WRX and STI with revised tuning and new technology. Nearly 4 years have passed since we’ve been behind the wheel of an STI. It was time we reminded ourselves why they wave.

The visual changes are small, amounting to a new front fascia that eliminates the fog lights and enlarges the lower opening. A new grille design and adaptive LED headlights are also part of the refresh. New 19″ wheels round out the visual changes. The STI’s aggressive posture, amplified by the gaping hood intake and tall rear wing, remains deeply satisfying. There’s a part of you deep inside that never grows up; the STI appeals to that part. 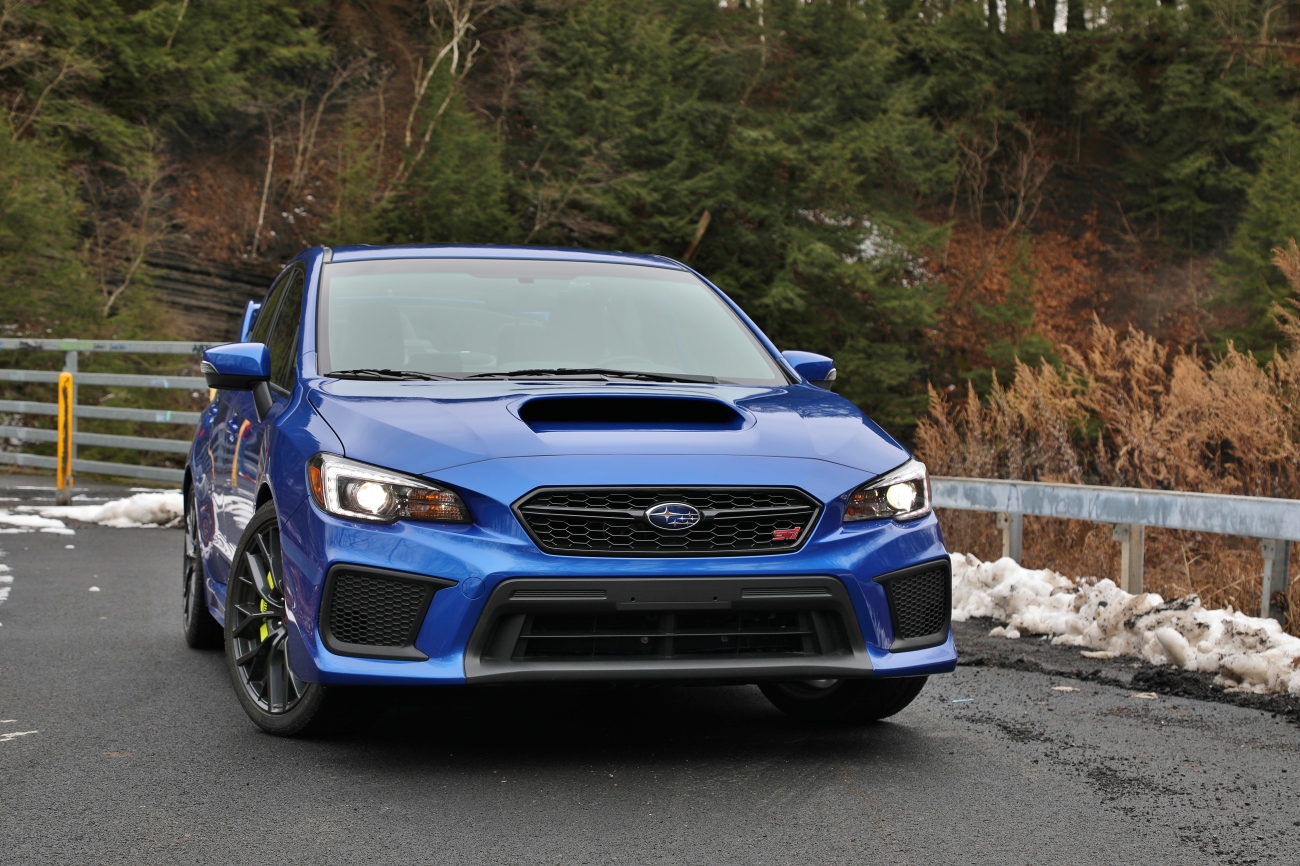 When we first drove the all-new STI in 2015, we remarked on its heavy and mechanical nature. While it wasn’t quite as harsh as the then-recently-discontinued Lancer Evo, it did comes across as a bit unrefined. Climb behind the wheel of this updated STI, however, and it isn’t quite so unruly as you might remember. Subaru has taken great care to mature the STI in all the right places, even at the expense of some of its tradition. The center differential is now exclusively electronically controlled for faster and smoother response from the all-wheel-drive system. The STI also gets a revised suspension tuning for a more supple ride. The resulting experience loses some of the World Rally Car feel, but makes up a lot of ground in terms of refinement. 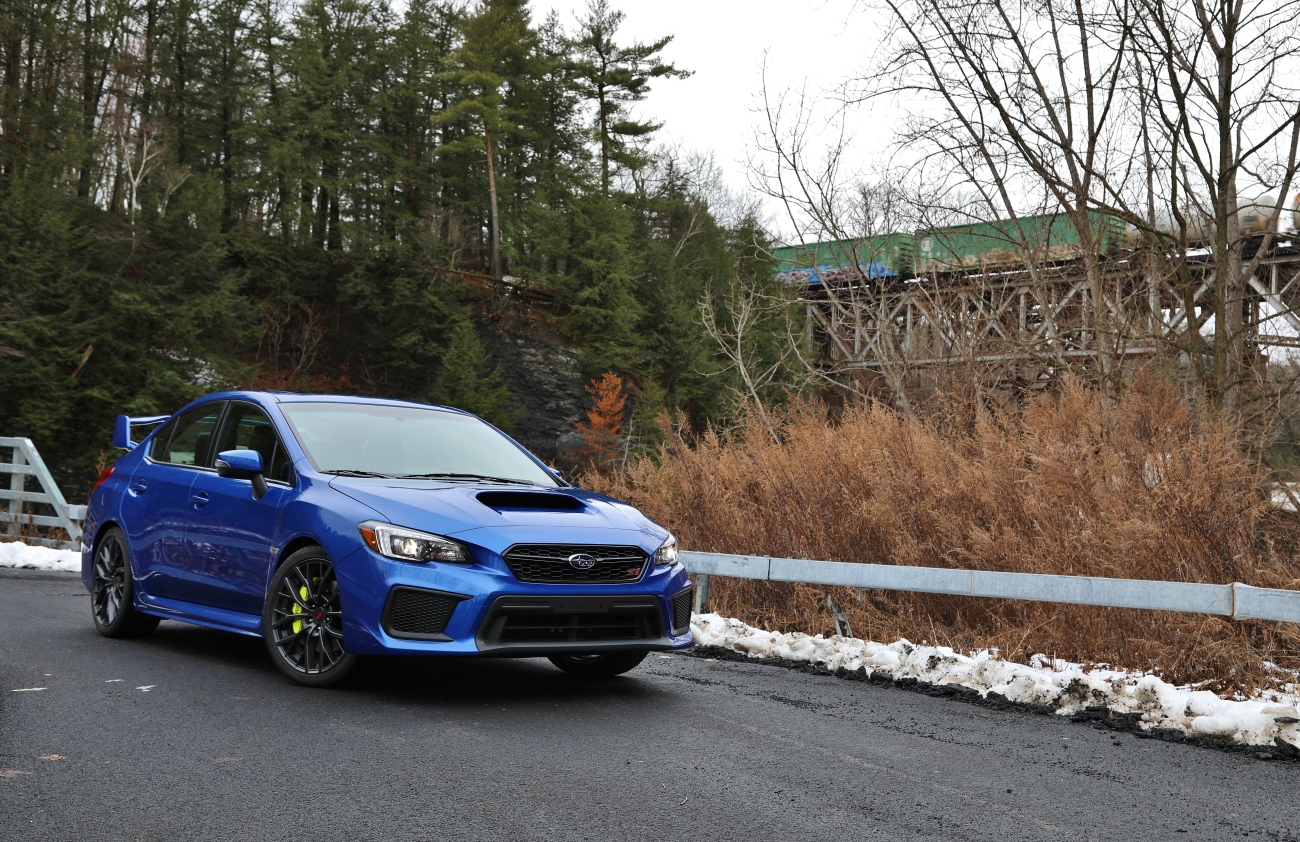 Don’t let our initial perception of softening fool you, the STI is still a performance focused machine. The 2.5-liter turbocharged flat-four engine and 6-speed manual transmission remain unchanged. With 305hp on tap, the STI is no slouch. Hydraulic steering remains with the ultra-quick steering rack for responsive and informative steering. Our tester arrived on Michelin snow tires, a welcome paring with Winter lingering like an unwanted guest. The symmetrical all-wheel-drive system’s tenacious grip extends to all seasons when properly equipped with the right tires. Aiding the high-performance antics of the STI, Subaru has updated the braking system for 2018. Larger and stronger brake calipers, now painted acid green, utilize new brake pads for more stopping power. Larger cross-drilled rotors are also part of the upgrade for better heat dissipation. Whether on the road or a rally stage, these enhancements help stop the Subaru STI more quickly and consistently. 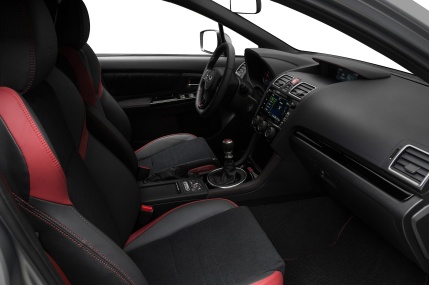 This 2018 STI is easier to live with on a daily basis. Much of the improvement comes from several changes that would never be noticed if not mentioned in the press release. Thicker door glass, revised door sealing, and foam insulation above the windshield all help to reduce wind and road noise. Interior materials have been upgraded and several touch points have been refined, including the door grips. Most notably, however, the multi-function display that sits atop the dashboard now uses a larger, high-definition screen. Sitting the the Recaro sport seats is now more enjoyable than ever.

Despite all the improvements, the STI still has its weak points. Perhaps it was the proximity to our test of the smooth yet sporty VW Golf R, but several things stood out. The clutch on our tester proved difficult, leading to several stalls over the course of the week. We found ourselves frequently slipping the clutch to avoid a jerky pull-away. When we did finally master the clutch, the occasional difficult and notchy shift disrupted our rhythm. Another major annoyance comes from the final drive ratio. On the highway in 6th gear, the engine turns at almost 3000 rpm, creating a constant thrum in the cabin. Even with the new noise insulation, it does begin to wear on you on longer rides.

Subaru’s rally heritage can still be felt within the STI. The car responds better the harder you work it. You don’t have to treat it delicately and with finesse, there’s more reward to be found blasting into corners at full tilt and letting the all-wheel-drive sort out the traction. Because of this, it’s a car that can very easily get you into trouble. And that’s the appeal of a rally-inspired road car. We don’t know what the STI’s future holds. It’s certainly the last of its kind, and whether or not a new generation in the works has yet to be seen. So why not enjoy it while you can? Just don’t forget to wave.