Have you ever wandered through dealership lots looking for something that reminded you of the good old days? Do you pine for that muscle car look and feel without having to deal with 40 year old technology? If you have, look no further than the Dodge Challenger. Encompassing the 70’s style, straight-line prowess, and the ever popular Hemi V8, the Challenger lives on as the only true American muscle left in Detroit. 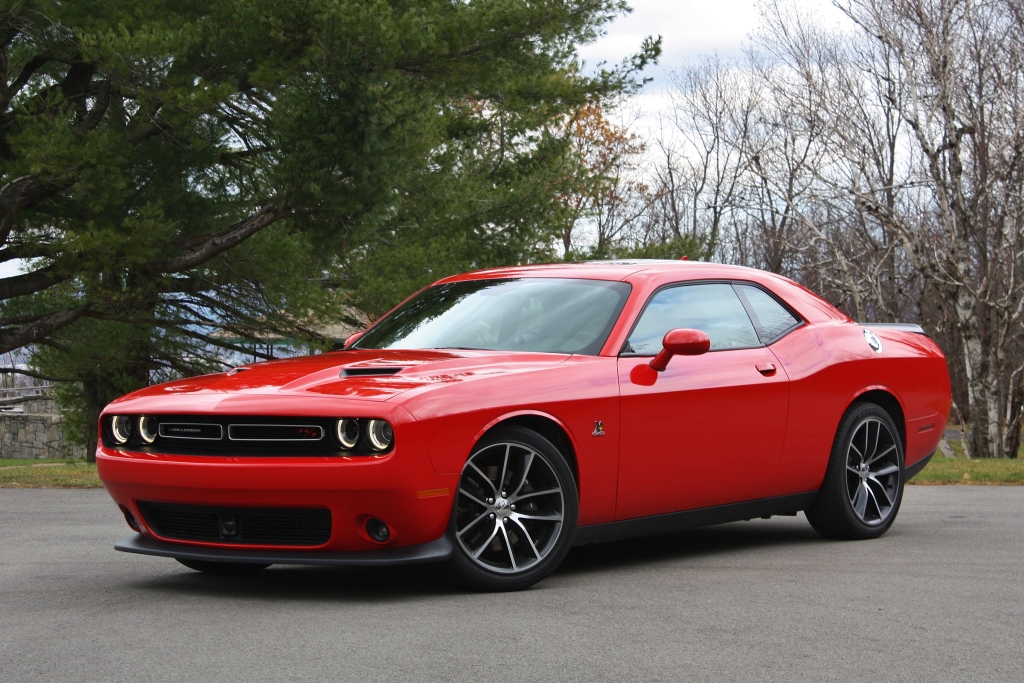 Dodge’s chief competition, the Camaro and Mustang, have morphed the top end of their models into track focused weapons. The Challenger, in all its retro glory, stays true to its roots. Nowhere is that more evident than the new-for-2015 Dodge Challenger R/T Scat Pack. Essentially borrowing from last year’s SRT parts bin, the Scat Pack gets the big 6.4L Hemi V8 making 485 horsepower. Brembo brakes, a performance oriented suspension, and an active exhaust round out the package. New for 2015 and equipped in our tester, Dodge’s TorqueFlite eight-speed automatic takes care of the shifting.

Its intimidating physique is impressive and, wearing TorRed paint, its attention grabbing personality never goes unnoticed. The mere presence of the Scat Pack can part the masses of traffic in front of you. Getting to 60 in the mid 4-second range, the Challenger is faster than its competitors. However, unlike the Camaro SS 1LE that we tested recently, corners aren’t its forte. The Challenger is best between the lights, as a true muscle car should be. Remember, this isn’t the full-on SRT version. We’ve experienced the Challenger SRT on a track, and it does a better job that this R/T would. But for its intimidating presence, it does not present an intimidating drive. It’s a happy and good-natured car, one that is easily excitable with a twitch of the go-pedal. 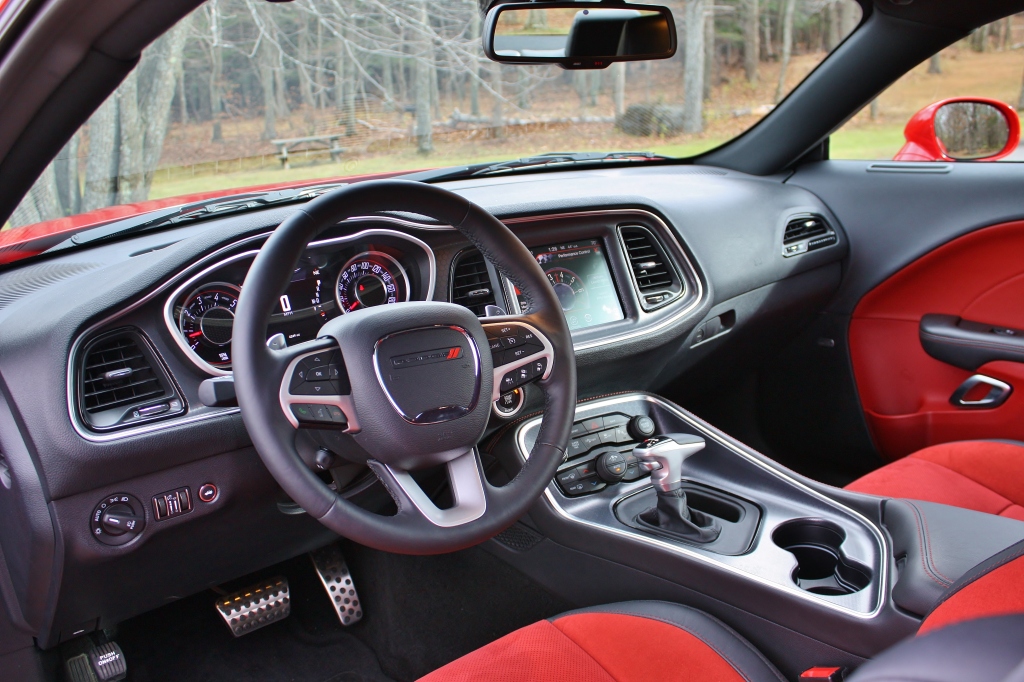 The Scat Pack wasn’t the only new addition for 2015. The Challenger lineup was refreshed with ’71-inspired designs for a new front clip and headlights, new LED taillights and a whole new interior. The latter now encompasses Chrysler’s industry-leading 8.4” UConnect system with Navigation. We’ve praised it before, and continue to do so. It is simply the best out there leaving its competition in the Stone Age. Dodge has focused most of its attention on the interior, improving the materials by adding soft-touch plastics and leather. There’s a new gauge cluster, new steering wheel, and new center console layout. Interestingly, Dodge also claims to have redesigned the seats for improved comfort and introduced a set of high-performance seats. Our tester came equipped with said suede/nappa leather high performance seats, but we found the lack of lumbar support to render them very uncomfortable. We haven’t had similar experiences in the Recaro units that grace their competitors. 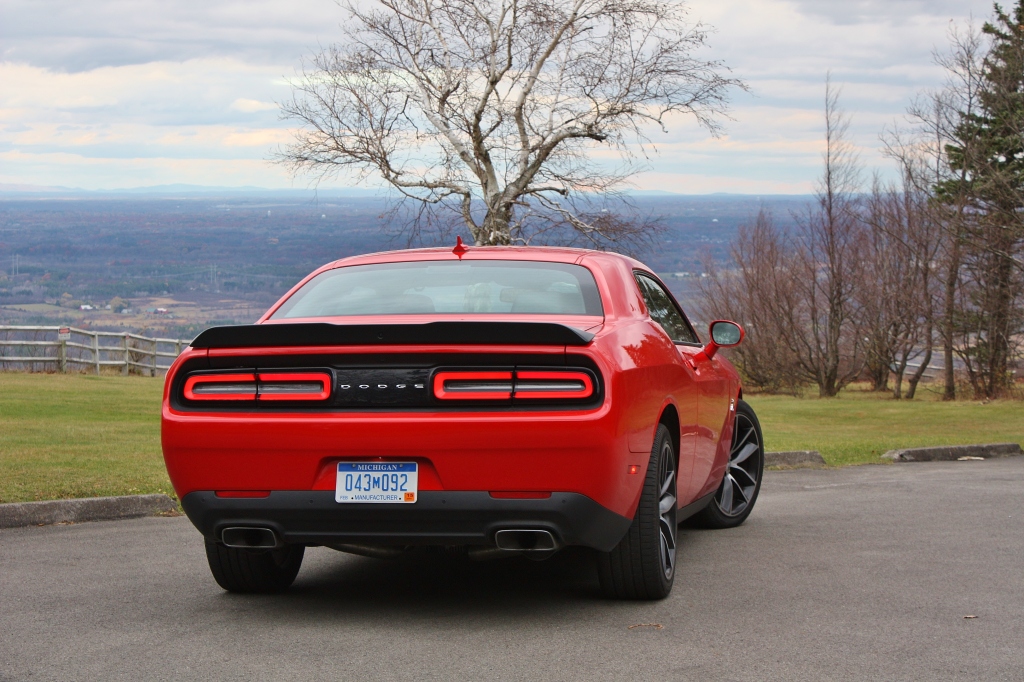 As stated earlier, the Challenger is more of a cruiser. Much more at home in traffic than the Camaro, our week was civil. No difficult clutch or semi-slick tires mean that you can truly drive this car every day. The only thing slowing you down will be the frequent visits to your local fuel station. Our week was spent in less-than-ideal driving temperatures and conditions for a muscle car, so we were unable to test Scat Pack’s to the fullest. From our experiences at the What’s New event at FCA’s Chelsea Proving Grounds and this week, we can say that the Challenger feels big no matter what you’re doing with it. It’s difficult to park and visibility is poor, but that isn’t what you buy a muscle car for, now is it? Thankfully, it’s equipped with a rearview camera. You buy the Challenger because you want that intoxicating V8 rumble, the odor of pending call to Tire Rack, and that green-light shot of adrenaline. It is a car for the occasion and it makes you feel special. The muscle car mindset is here to stay thanks to Dodge. The Challenger is the quintessential choice for those who want the 70’s flair, without the 70’s problems.