You might think the craziest thing Dodge has done in recent memory is launch the 707hp SRT Hellcat. You’d be wrong. When the sensible people at FCA weren’t looking, Dodge went and dropped the SRT’s 6.4L V8 into a Challenger R/T and called it a day. The sheer audacity of the idea could only be pulled off by Dodge. The resulting car proved to be the most entertaining vehicle of 2015.

We’re not saying the Hellcat isn’t a certifiably insane idea with a window sticker. We’ll endorse any vehicle that arrives with two levels of keys. But the Hellcat builds off of the SRT’s performance upgrades. They both use the same Brembo 6-piston front brake calipers and 20×9.5” wheels to keep the power in check. Other than the obvious engine differences, the Hellcat’s only major change from the SRT is the unique Bilstein suspension tuning. Enter the Dodge Challenger 392 Scat Pack Shaker. It’s a mouthful to say, but it’s essentially a Challenger R/T with several heritage option packages…and a big V8. The Scat Pack’s Super Track Pak adds standard performance upgrades to suspension, brakes, and steering, but it doesn’t bring the full SRT treatment. Instead of 6 pistons, the Brembo front calipers make due with 4. The tires are a half-inch thinner than the SRT’s. It’s all of the meat with less of the potatoes. And boy is it a hoot. 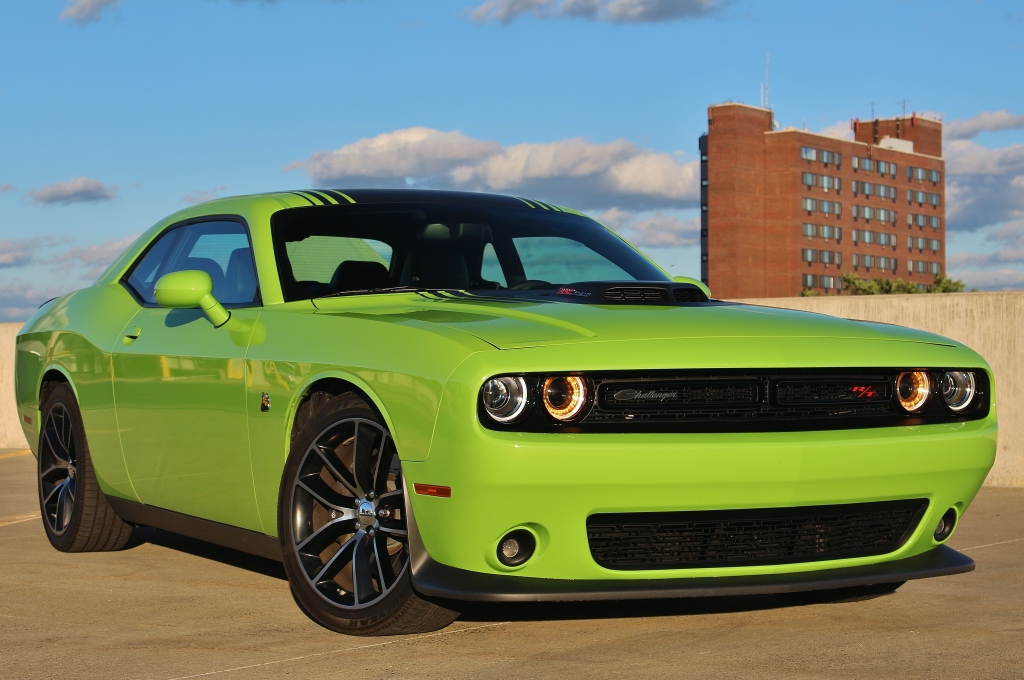 We’ve driven the R/T Scat Pack before, in November of last year. The 392 Scat Pack Shaker is much the same story. The 6.4L V8 makes 485hp and 475lb-ft torque. A new and fantastic TorqueFlite 8-speed automatic transmission is optional in place of the standard 6-speed manual. The combo launches the Challenger to 60mph in four-and-a-half seconds with the help of launch control. The Shaker package brings back another heritage option to the Challenger. A functional, engine-mounted hood scoop rams cold air into a conical air filter beneath the shroud. The Scat Pack’s electronically-controlled exhaust rumble is accentuated by the whistles and whooshes of induction noise. Besides the large hole in the hood, the Shaker package adds satin black graphics, a gloss black grille, and satin black rear lip spoiler. 392 badges on the Shaker scoop and Shaker embroidery on the leather seats add further visual cues to this unique option package. 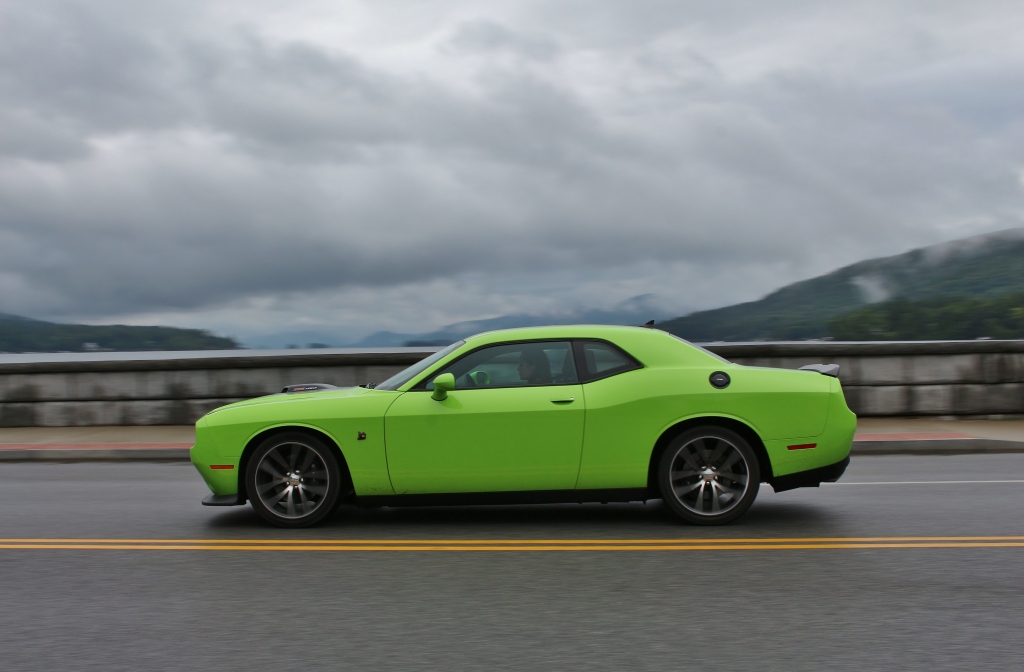 For 2015, B5 Blue and Sublime Green return to the Challenger’s color palate. Our tester, in Sublime Green with the Scat Pack’s black accents, was a visual standout. Wide-eyed children and Vietnam veterans alike stop to admire the Challenger’s striking design, retro styling, and loud color. On cold starts, the Shaker scoop lives up to its name. With a twitch and a jump, the 6.4L V8 roars to life. A Sport Mode for the Challenger 392 Scat Pack Shaker allows the driver to customize engine and transmission, traction control, and steering settings on the fly through the 8.4” touchscreen. Dodge’s Performance Pages, standard as part of the excellent UConnect system, helps you track the results. 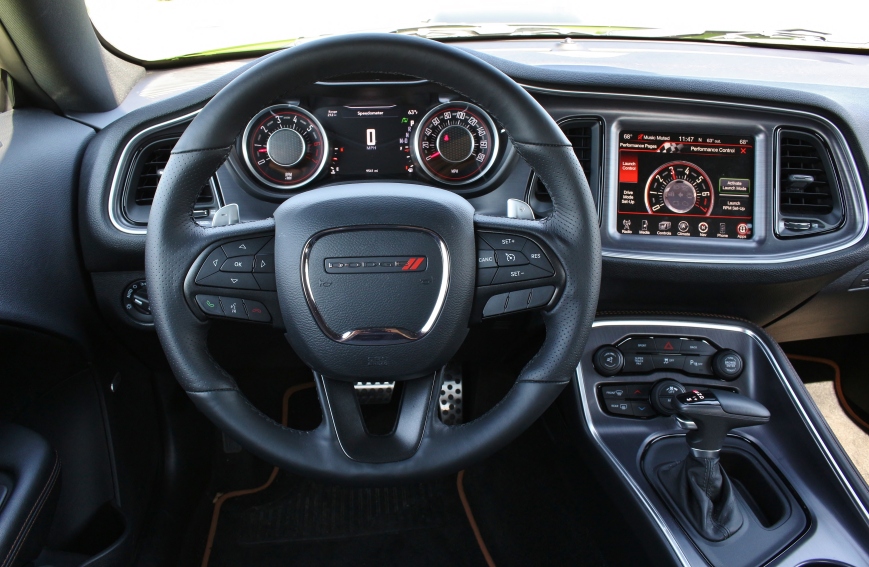 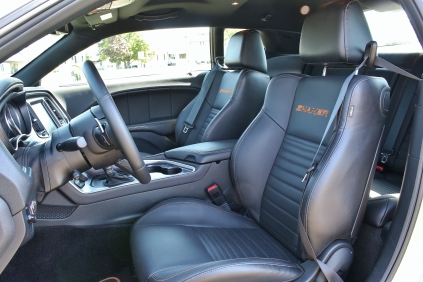 The Challenger is a big car. You see it when you park next to a mid-size sedan. You feel it when you try to hustle through some tight turns. But for its big & tall stature, the Challenger has an even bigger personality. Big, green, loud, offensive; it’s like living with Shrek. But there’s so much joy from waking up to a Sublime Green Challenger in your driveway. Watching the intake scoop twitch and jump under wide-open throttle, with the windows down and exhaust booming, is the crudest yet most satisfying form of entertainment you can legally partake in. The whole car just reminds you of a time when Americans were sticking it to the man and CAFE standards hadn’t killed the carburetor. And while you can’t go back to that time, Dodge will help you metaphorically stick it to “the man” with the Dodge Challenger 392 Scat Pack Shaker in Sublime Green for $46,000 of your hard-earned greenbacks. So if you’re looking to start off 2016 with one rash decision, make it this one. You’ll certainly be entertained. 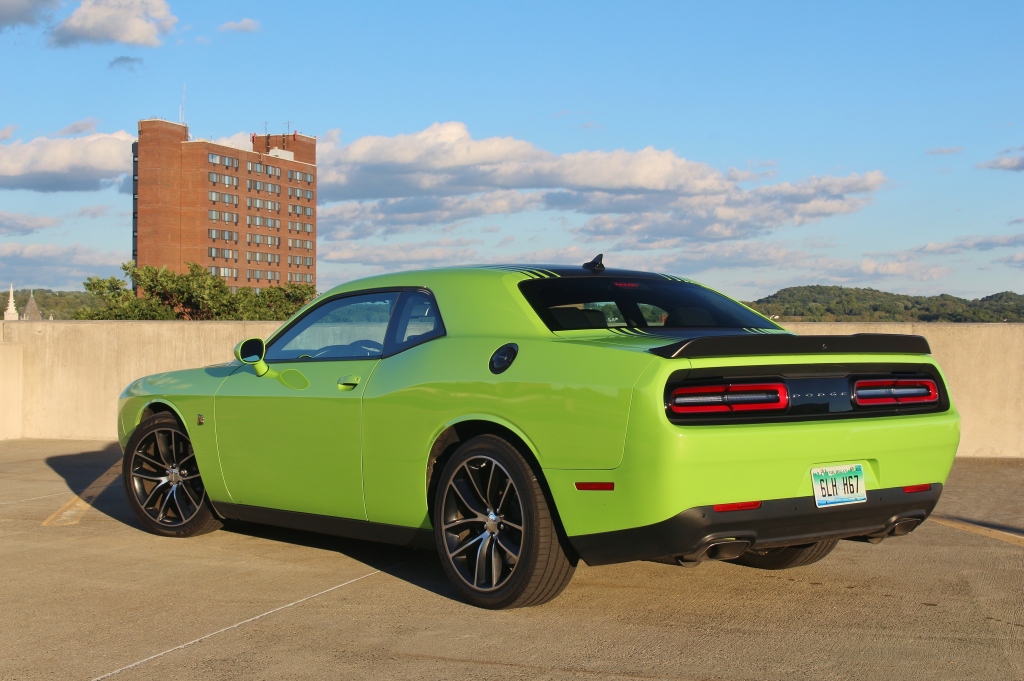