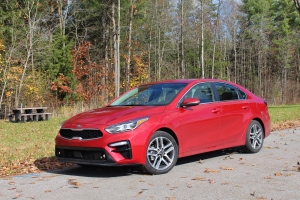 Kia sold more Fortes in 2017 than any other model. To keep pace with its popularity, Kia has completely redesigned the Forte for 2019.

With every redesign, Kia becomes increasingly enticing, and the 2014 Forte is no different. For 2014, Kia worked on addressing the bland interior and road noise concerns of consumers and critics. The question remains, how victorious were they in their efforts? Our Forte arrived in head-turning Abyss with […]