A few years ago, many would shy away from the Lexus brand due to their lack of sporting credentials.  All of that has changed, and for 2013 Lexus gave its flagship a freshly pressed new suit. For the 2013 model year, Lexus breathed new life into the LS.  […]

We enjoy hatchbacks for their good looks and real-world practicality. We’re especially fond of hot hatches with their added power and driver involvement. This Spring we’ve driven a wide variety of hatchbacks, from the Kia’s hot hatch cousin, the Hyundai Veloster Turbo, to the efficient and stylish Lexus […]

In a world of ever growing cars and human beings, it’s refreshing when something a bit smaller shows up.  Chevrolet calls it the Spark, and it is full of personality. Dubbed a city-car, the Spark is certainly all about being small.  Just as you would akin an owner […]

Full disclosure – I have never liked crossovers.  While a sport compact or a hot hatch is my idea of motoring perfection, I’d rather drive a wagon rather than an SUV or crossover, and it’s because of two things: The first being size; Second, historically inferior driving characteristics.  […] 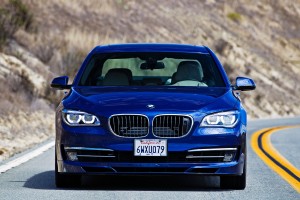 If you’re one to enjoy the larger and more luxurious things in life yet still want to go fast, the BMW Alpina B7 is for you.  As we reported when the refreshed B7 was released, the Alpina is enhanced for the 2013 model year; some more horsepower and […]

I must start with an admission. I have been fairly outspoken about my dislike for matte paint calling it dull, unimpressive, and generally useless to the general public. While matte paint might not be the best option for every driver, the matte gray paint on our tester turned out to […]

To my knowledge, nobody has ever been excited at the sight of a Nissan Altima.  In fact, I never took notice of all the Altimas around me until I drove one.  Suddenly I found myself surrounded.  It turns out that the Nissan Altima is the second best-selling sedan […]

The Lancer Evolution is insane. Engineers at Mitsubishi decided to take an average sedan, spend nearly $20,000 on a drivetrain, and offer it for sale. The results are nothing short of astounding. When you open the door, you immediately realize that the Evo isn’t exactly what you would […]